Here is a list of most of the books that I own which are relevant to the Crusades. I would appreciate suggestions on books which will complement this list - especially if they are currently in print.

A Wargamers guide to the Crusades    Ian Heath

The Art of War in the Middle Ages (vol1)   Charles Oman

A History of the Crusades (in 3 volumes)     Stephen Runciman

I also enjoyed the following novels:-

This game scenario was set up as a sequel to our Battle of Lobositz (played earlier in the year.) The reversal of history in our version of the battle, (the Prussians gave up the field instead of pressing on to win the battle) had the consequence of inspiring the demoralised Saxon army to try to break out of their besieged camp at Pirna Konigstein. (briefing.- click here) 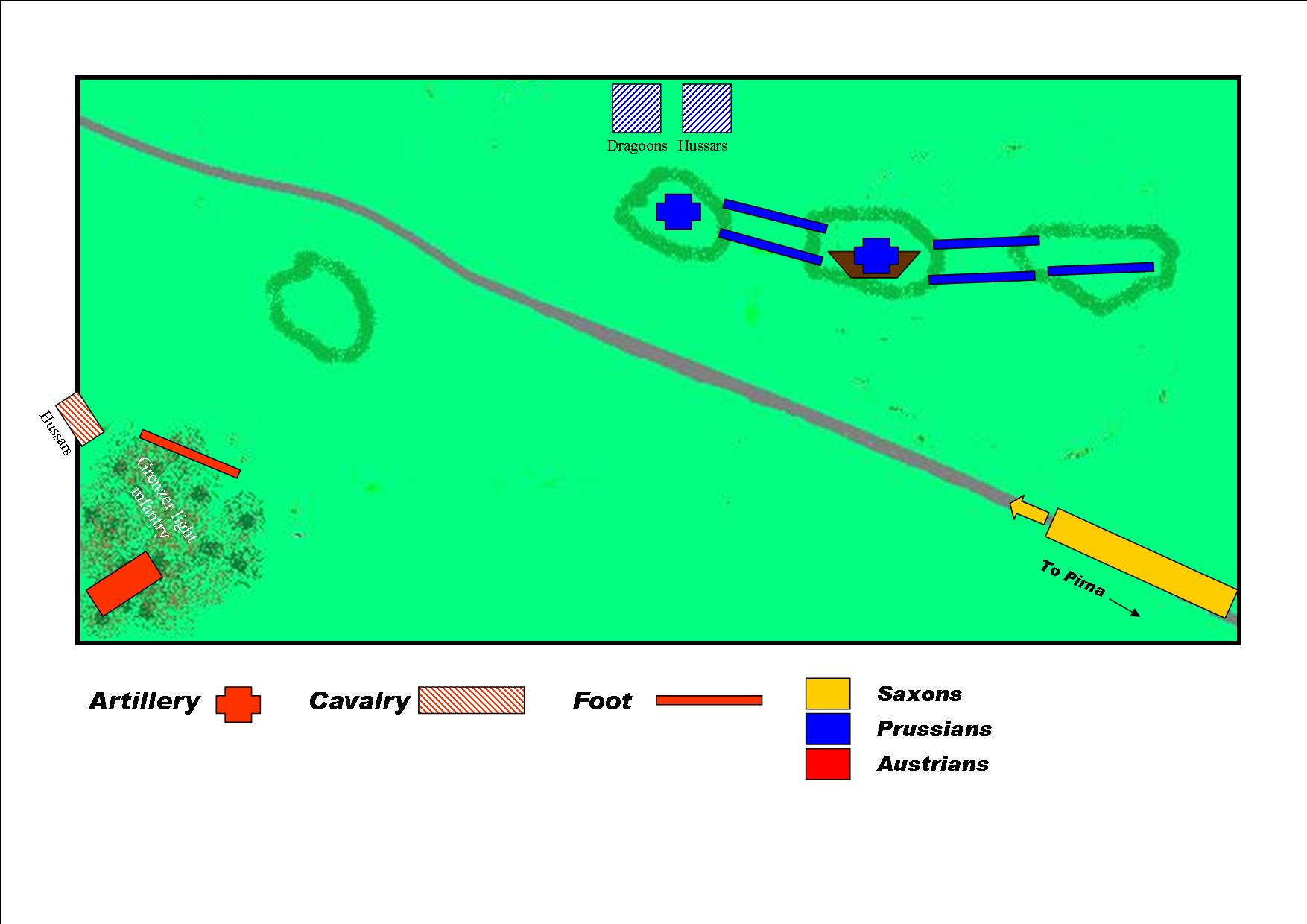 The objectives for the game were for the Saxons to get as many units as possible off the table at the other end ot the road, for the Prussians to stops them and for the Austrians to provide what help they could to the Saxons without being destroyed or cut off from their escape route through the woods.

In turn 1 the Saxon flung their march column of infantry as far down the road as they could and started to peel off individual battalions into line formation to screen their marching colleagues from the Prussian guns. The Prussian heavy cannon dukly obliged  by oipening up a devastating fire on the Saxons below them on the road. (The Prussian guns had an advantage by being on higher ground "Superior Position" but being on a hill did prevent their shots bouncing through the screening infantry into the close packed march column behind.) 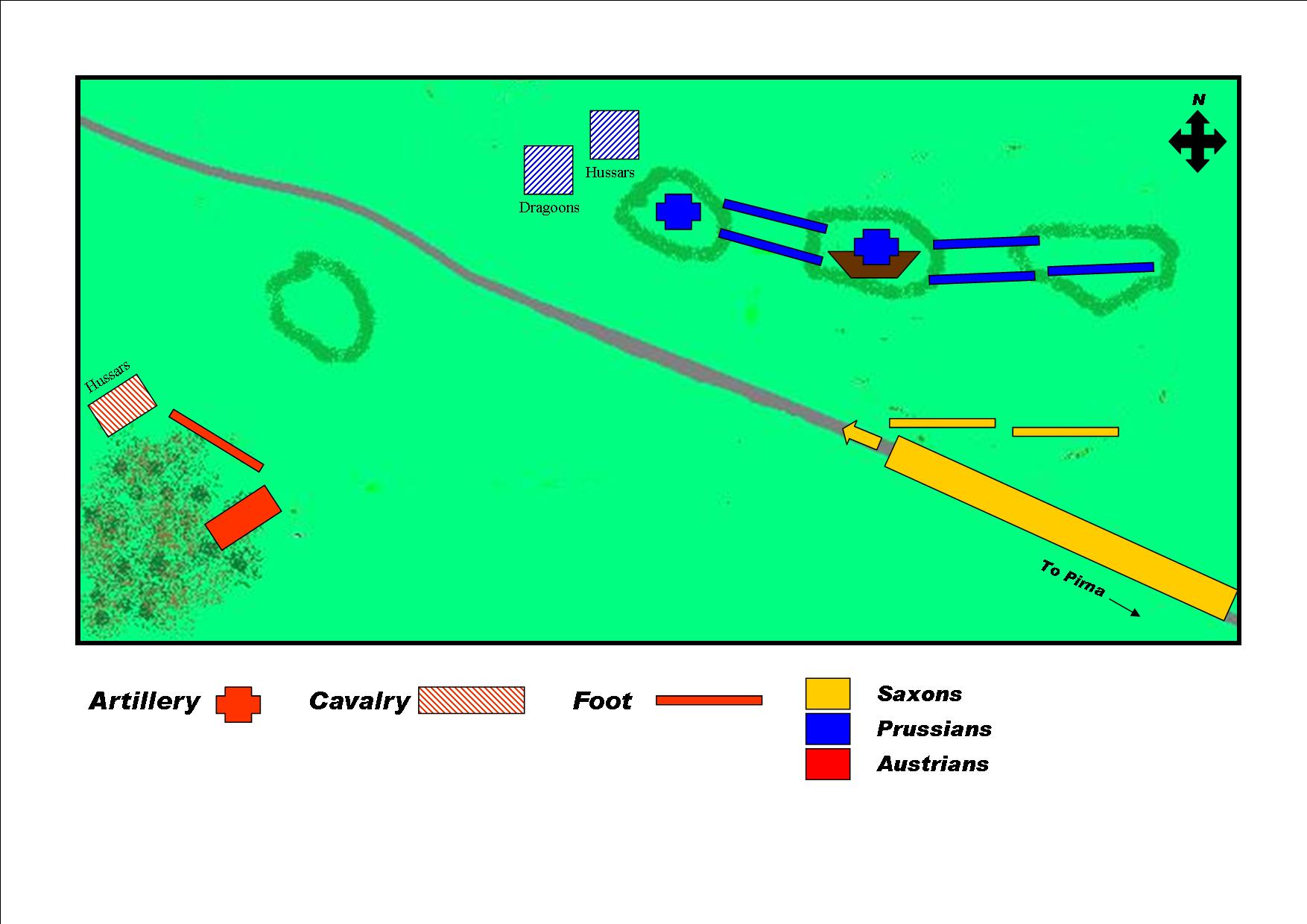 The Austrians cautiously edged through the woods towards the Prussian flank. (It was early on that the flaw with using Trionimos to regulate the initiative for a 3 hander game became apparent. We were using a variant of the domino system where the initiative winner gets twicw the large number on a random domino in Impetus and the loser gets the face value of the lower number. With Treionimos the Austrians were to get the face value of the lowest number on the tile regardless of which side won the initiative. Sounds reasonable except the vast majority of the lowest numbers are 1s and 0s! - The Austrians were to have a slow-paced impetus free game!)

The Prussians had to decide when their first movement card was turned whether they wanted to call for reinforcements straight away or wait to call on turn 2 or 3. The sooner they sent out the call the higher the penalty for forced marching. They chose Turn 1 and the order was given, "Abandon stragglers, dump packs and get here straight away!" Now the Prussians discovered when the reinforcements would arrive D3+1 turns (they rolled a 2.)

The Saxon player won the lions share of the early initiative and used it to work through the card deck to find movement cards and get the march column moving. One of the results of this was that the lead battalion was caught in a terrific crossfire from the Prussian batteries and destroyed. 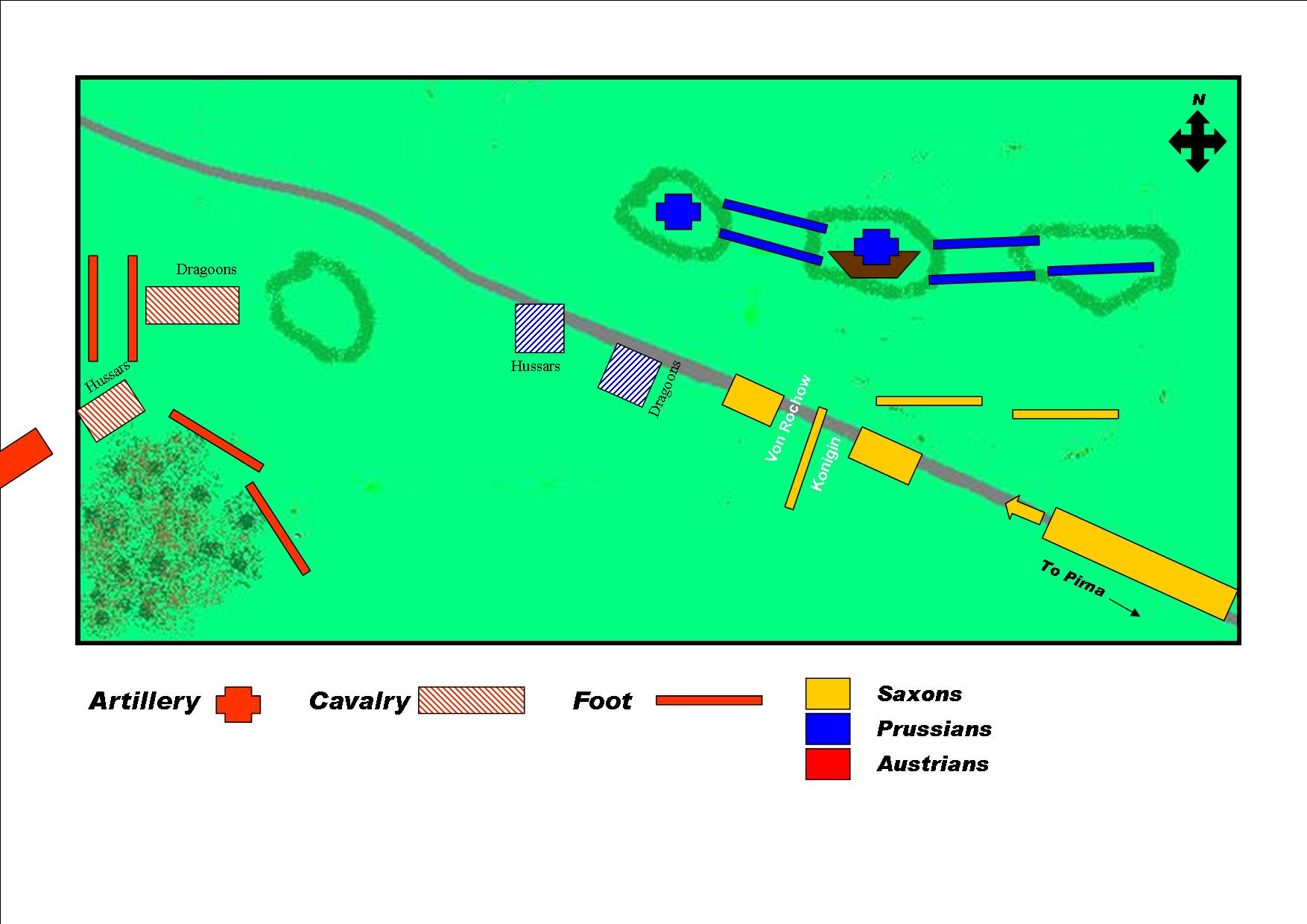 In turn 2 the Prussians sent their brigade of cavalry thundering down the road towards the shattered head of the Saxon column. This aggressive manouvre was thrown into some confusion as the Austrians deployed to support their allies and General Browne heroically galloped the Leichtenstein Dragoons forward to threaten their rear. The Saxon regiment Von Rochow was flung as far down the road as posssible to confront the Prussian cavalry and give their comrades room to deply behind them. They paid the price being torn to shreds by close range fire from  the Prussian guns but their sacrifice allowed Regiment Konigin to deploy into an implaccable line across the road.

Turn 3 arrived and so did the flank-marching Saxon horse! (The Saxon commander had gambled on favourable position over the certainty of the horse arriving on the road with the rest of the column.) The Prussian horse was now in a very perilous popsition with enemies all around. The Prussian dragoons hurled themselves at Regiment Konigin which had been badly mauled by the ever-effective cannon fire from the hills. The remaining doughty Saxons however let the Prussian horse approach and then let rip with a devastating volley of musketry (a 12 was thrown on a 12 sided dice!) The dragoons ceased to exist as a fighting unit.  The hussars fared not much better being charged and put to flight by their Saxon counterparts who then reined in their pursuit and turned to attack the Prussian cannons on the hill.  The rest of the Saxon foot pushed up the road as far as they could until the congestion of units halted them.

The next turn the reinforcements from the Prussian army arrived... 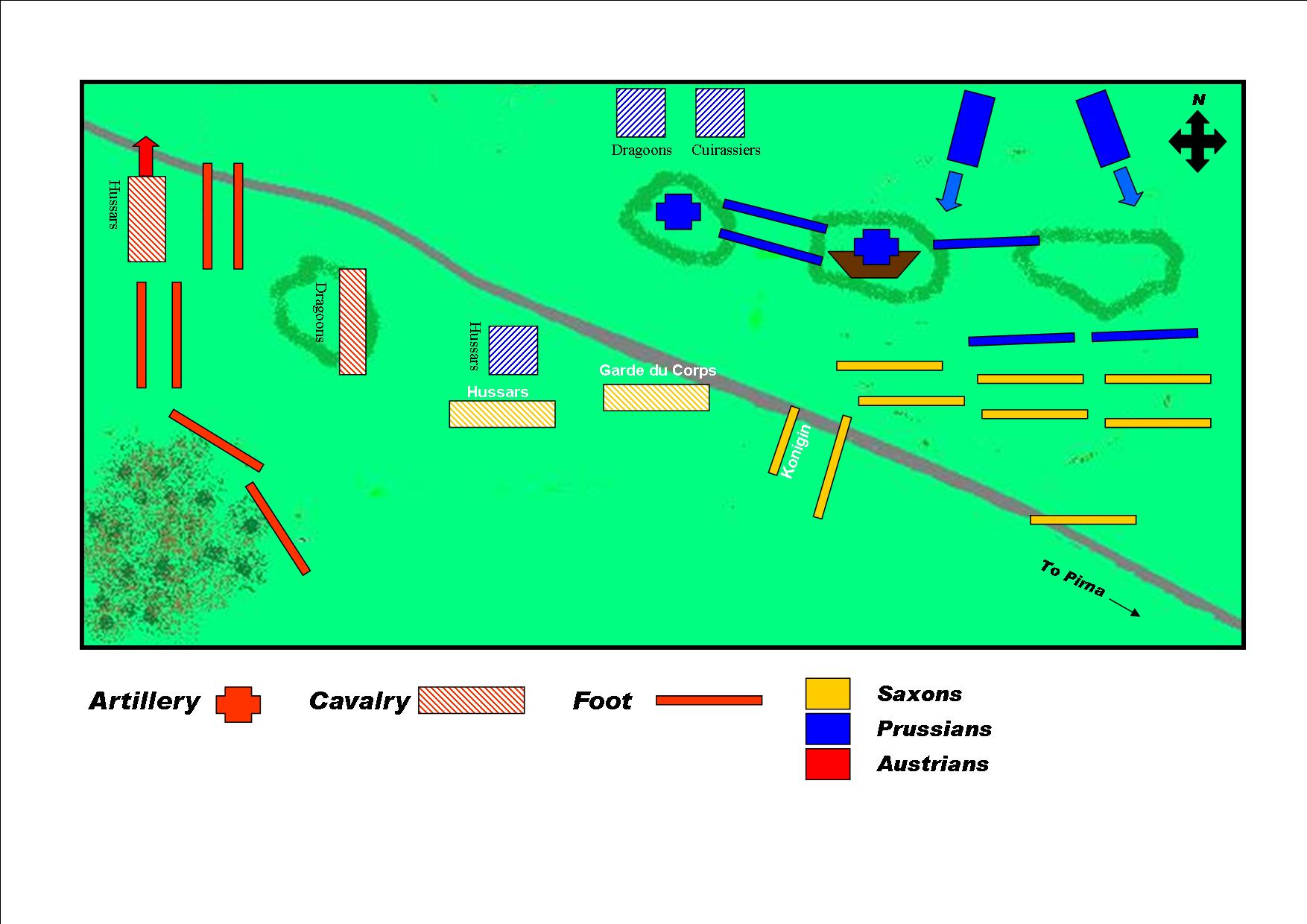 Timing was now everything. Initiative seemed to desert the Saxon side just when an unlikely victory was within their grasp. The Saxon hussars were poised to charge the flank of the Prussian guns and then on into the flank of the deployed infantry. It wasn't to be, the newly arrived if battle-weary Prussian cavalry cleared away the Hussars and moved to contest the road with the Austrian dragoons. On the Prussian left with new supports  moving up, the foot advanced on the deploying Saxon column. The Saxon infantry fought well but the cream of their army were the units that had been savaged at the head of the column, these less disciplined troops were no match for even second-rate Prussian foot. 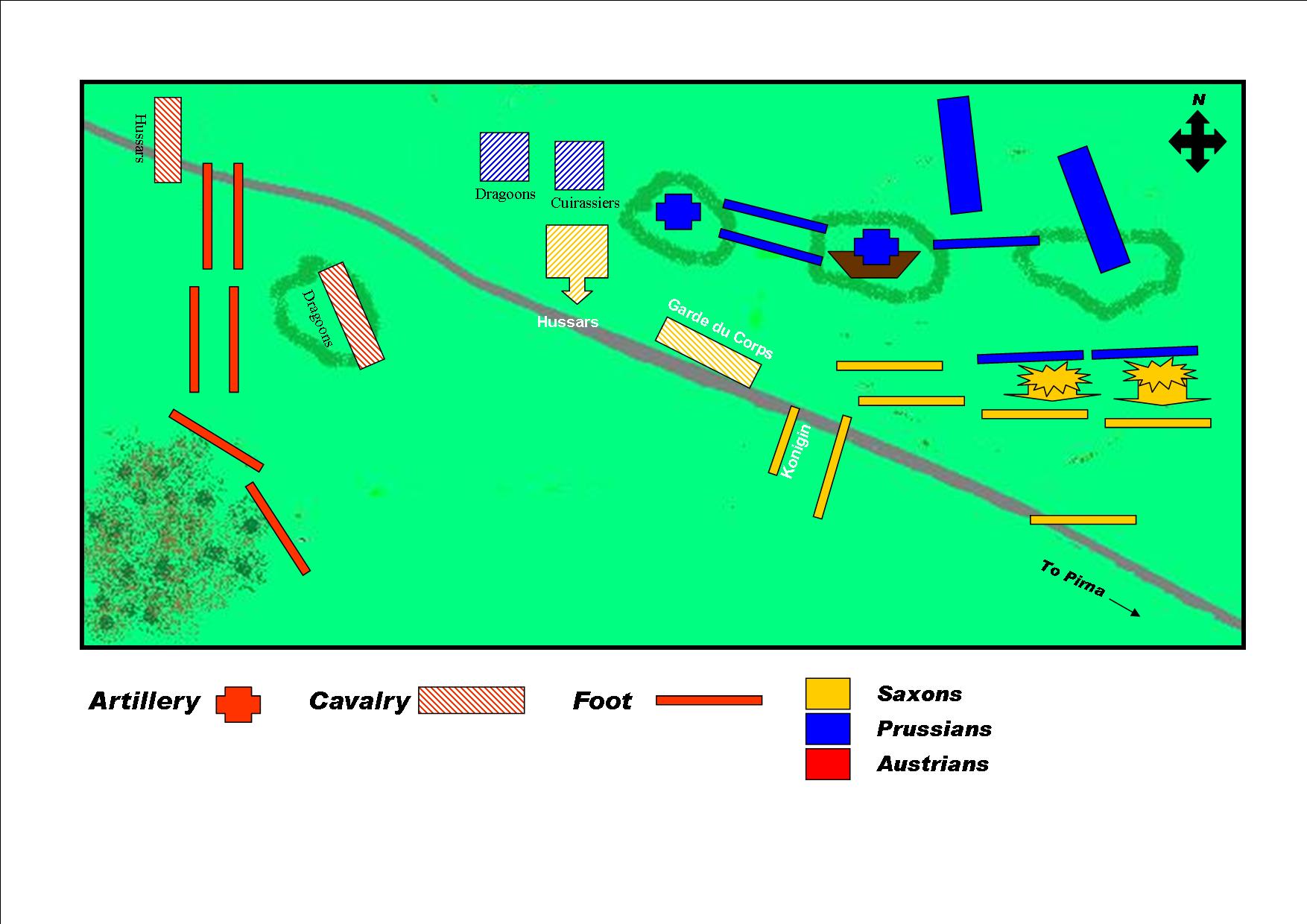 The aftermath: Time called a halt to proceedings (dinner was waiting!) It was agreed however that the Saxons now had little chance of succeeding in their breakout attempt and would in all liklihood recoil back into their camp. This being so the Austrians were unlikely to carry on the fight if no real advantage was to had for their allies. They would slip away to Bohemia behind a screen of Grenzers and Hussars and dispute the terrain "as far as the laws of war would permit."

This was a  typical  Piquet battle, edge of the seat events all the way through and the advantage swinging first one way and then the other.  The players were all enthused about fighting a large battle in the New Year, which is a good sign. How the result of this one effects our version of 1757 will have to be considered...

Trying Out Theatre of War

I have had a copy of "Theatre of War" for several years without getting much past reading the first third of the rules.  A set of campaign rules based on the Piquet tabletop games system,  Theatre of War (ToW) uses the various sets of cards that are utilised in the tabletop rules. This is part of what makes the comprehending the mechanism such a chore, as cross-referencing to the basic rules quickly becomes confusing.  However, for a long time there have been discussions about getting a new campaign running and I girded my loins (mental loins that is) for another crack at Tow.

Persevering with the read through of the rules and then putting together the prep for a test game did  clarify the system and gave me a good feeling that there was a fun game lurking within. Proof of the pudding etc. being usually very true I proposed a tryout on a weekend where a specific game had not been scheduled and set about putting the map and cards together.

A map is, strangely enough, not required to run the campaign. Instread a grid is  randomly generated with difficulty of terrain and campaign value ratings. I chose to lay this grid over a depiction of a map (stolen from the Internet - thankyou Google) as I felt it was more fun this way.

The map with a grid overlaid: 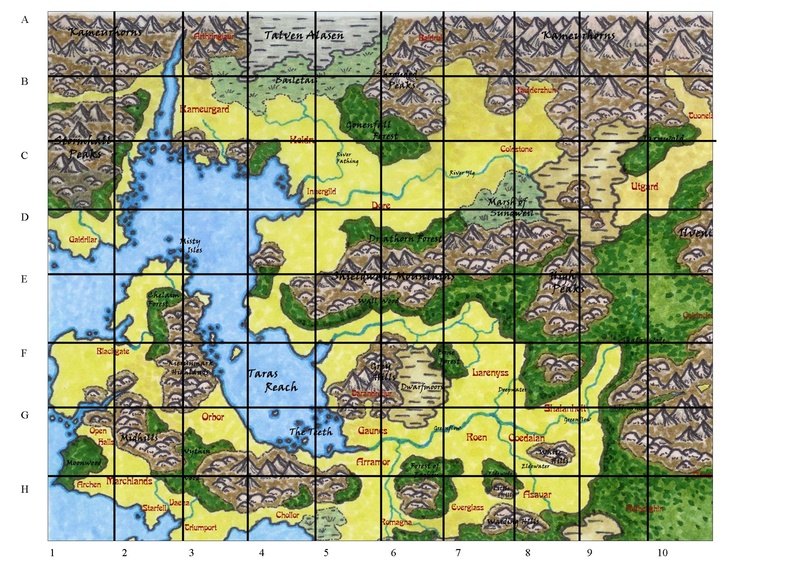 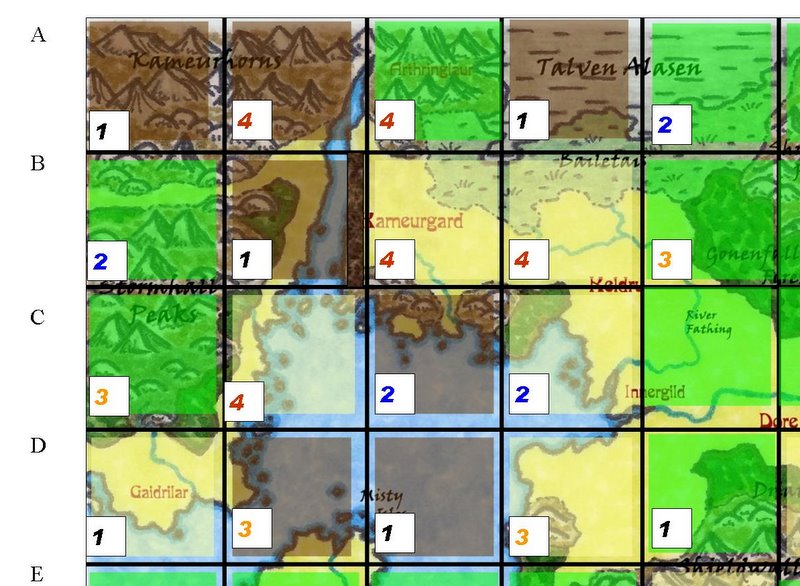 The decks of cards are played in each campaign turn to allow armies to move and other strategic actions such as forming supply dumps. The cards also build up a Battle Hand that gives advantages when it come to fighting a battle. There is a hand limit depending on the season, so there is a compromise between having a good Battle Hand and having cards useful for strategic moves.