This was our biggest game of Archon (Piquet rules for the “Ancient” period – 3000 BC up to 400 AD) for many years. A Punic Wars scenario was devised (by Jim) and as the details were revealed the premise became clear. A Roman army on its way to allied Seguntum being ambushed by Celtic tribes that were previously thought to be bribed / friendly. The setup had the Roman army marching down the road with the head of the column having rapidly deployed to confront a Carthaginian force barring the way across a small river. The game started with Celts emerging from the trees on both sides of the road flanking the Romans.

The overall effect was similar to the disastrous Roman defeat at Lake Trasimene but with the enemy on both sides rather than just one. It would similarly be a race to see if the Romans could cut their way through the blocking force before the body of the column was overwhelmed. As the size of the Celtic ambushing force became clear, the Roman players were convinced of the dire situation that they were facing. A rearguard of another legion was available to join the fight in later turns but the chances of there being an army for it to join looked quite remote. 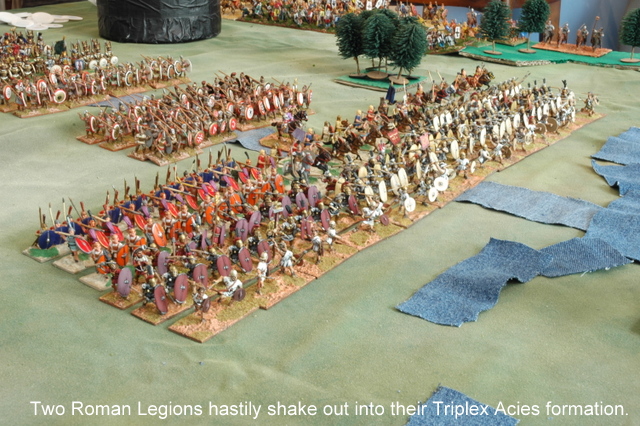 As well as the huge number of units on the table (28 Romans initially and 38 Punic / Celts) the game featured the use of 5 separate Sequence Decks for the 5 different player commands (the Sequence Decks dictate the order in which a player can carry out the different actions available with their troops.) This was an experiment and called for a new way of distributing the initiative available. It was decided to use a variant of the “Odin die” method where the players all roll a D20 and this is compared to a D12 (the Odin die.) The difference is the amount of initiative each player has. Rolling less than the Odin die means no initiative for that round. Jim tinkered with this method by starting the Odin die as a D6, then moving up to a D8 to get the game started with higher initiative for everyone and a reduced chance of any player having zero initiative.

The game started with the Roman column getting some good initiative rolls which allowed the Italians and Allies a chance to deploy and they swung round to face the Gallic hordes pouring towards both flanks. The two Roman Legions at the head of the column were able to press forward to get at the enemy ahead of them and get away from the charging Kelts. The two ambush forces pressed forward in a fairly uncoordinated way towards the Italians formed up back to back along the road and charged into contact at the first opportunity. Their impetuosity could have led to disaster as the run of initiative allowed the Italians to initiate melee with superior numbers in several places along their improvised line. The Gallic luck held however as even outnumbered the Kelts were able to smash their lower quality Italian opponents. 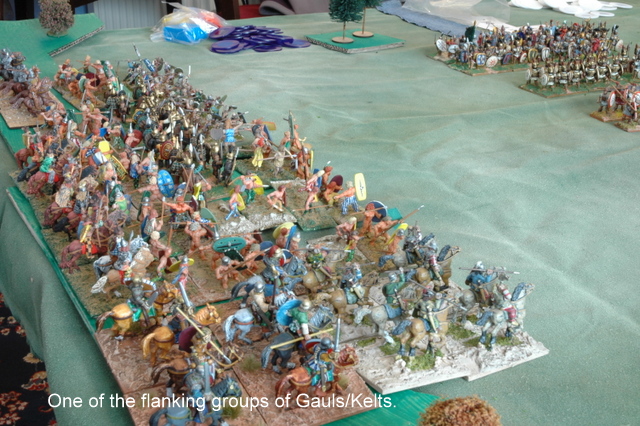 The Roman column was rapidly overwhelmed but they had bought enough time for the Legions to cross the river and close with the advancing Carthaginians. The first turn finished with the Roman Velites brushing aside the Punic skirmishers having weathered a hail of slingstones. Equites and Triari guarded the rear against the victorious Gallic tribes. Unfortunately this also signalled the end of the game as time had run out. 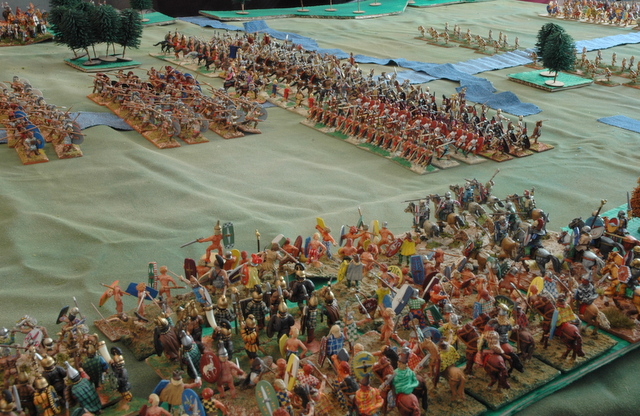 The game was a fascinating challenge and even in the midst of inevitable disaster was enjoyable for the doomed Roman commanders. The Odin die initiative system along with five Sequence decks of initiative cards were a limited success allowing action to occur all across the tabletop. However as predicted, the amount of time required was drastically underestimated for the number of units in the game once individual unit movement and combat had started. The Roman reinforcement Legion was never to enter the game and the Roman vs Carthaginian clash did not get past the front line of skirmishers. Good fun game overall however and nice to see a good proportion of our Punic Wars figures out on the table. 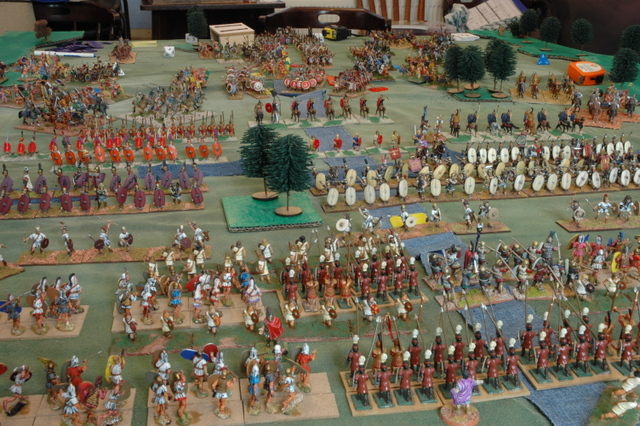 Reply nick
12:14 PM on April 15, 2013
Oh God it was a bloodbath - the photo shows how many troops were on the table & they all came my way. I have completed a further 5 Gallic infantry units since the game so we should have the figures to fight a decent sized Gallic civil war without using civilised troops.