The Battle of Rossbach is not an obvious subject to try to wargame and is problematic for several reasons. Chief amongst these is the overwhelming disparity of the historical outcome. No narrow squeak this one, the Prussians won big from the very start of the action (mostly) and then it was all one-way traffic from there in with no real chance for the Franco-Imperial army to turn the tables. (Are those horribly mixed metaphors? I think you still get the idea though...) Never one to let good sense come between me and a challenge I decided to try anyway, particularly after I had reread the Rossbach section of the excellent "Prussia's Glory" by Christopher Duffy. 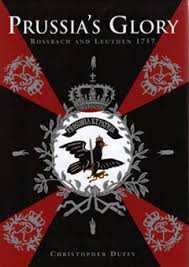 The Duffy book sets the scene and the context of thebattle very well and does assist with a potential objective for the Franco-Imperial (Allied) players. The Imperial commander Hildberghausen wanted to turn the Prussian position and either attack them from the flank at an advantage or force them to retreat precipitously. The battle unfolded in real life with an initial cavalry action followed by the clash of the infantry and the victorious Prussian cavalry helping to crush the Allied foot which was fed piecemeal into the fray. This pattern looked to be something we could reproduce on the tabletop. With the French players perhaps in the dark as to the battle they were refighting and given victory conditions that are essentially obsolete as soon as the battle has started, the same sort of decisions and actions might be possible as were taken by their historical counterparts. 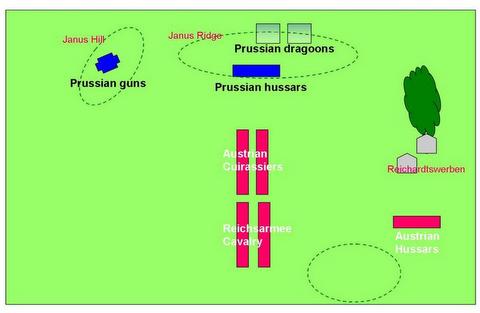 The initial dispositions were based on the historical events, with the unsuspecting advance guard of the Franco-Imperial army in march columns about to be attacked by the first wave of Prussian cavalry. My suspicion was that there was every chance that the battle would go along the same lines as history with the Allied army being caught hopelessly out of position by a higher quality Prussian force and taken to pieces quite easily. I felt that this had to be a viable outcome if the battle was to have anything but a passing resemblance to Rossbach. My mitigation of the lack of game enjoyment was the change possible  in the Allied orders during the game. Once (and if) it became obvious that the Allied forces were doomed they would receive new instructions giving them the chance to gain victory points for every turn that commands survived on the tabletop. In this way they could at least get a notional victory by doing better than their historical counterparts. 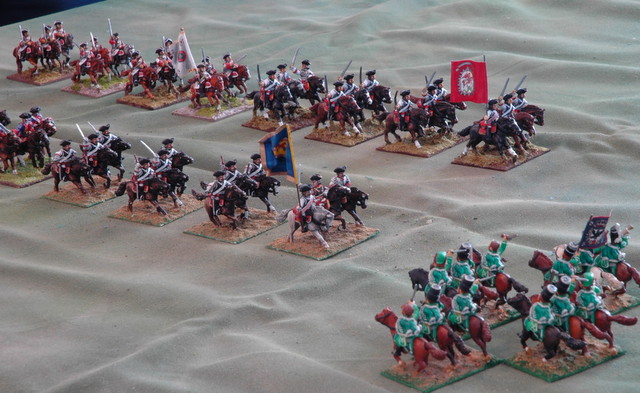 The Allied Advance Guard, led by Austrian Cuirassiers, marches across the plateau towards a screen of skirmishing Prussian hussars (in green.)

The army rosters gave each side the anticipated arrival time of their reinforcements and in some cases these were dependant on a dice roll (increasing the chance by one each roll to be certain that they would eventually arrive.) The Prussians although quite heavily outnumbered consisted of all highly trained and motivated units and would be entering the table from advantageous directions and deployed in battle formations. The Allied commands would mostly be entering the table in march columns with a good chance that these might be attacked before they had an opportunity to deploy into more effective formations. 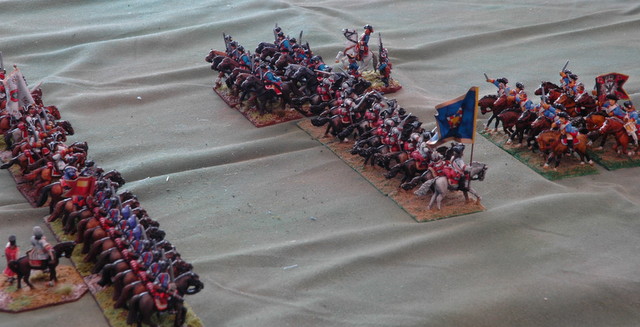 The first line of Prussian dragoons scythes their way through the Allied cavarly column as they struggle to get into formation.

This was about the most complex scenario of this size that I have attempted. As if there weren't enough vartiables to account for I decided to introduce some chance cards into the equation. These were intended to allow a possibility for unusual events that occurred in the real battle to happen (a cavalry unit becoming confused and attacking its friends for example) but without any certainty. I'm not sure, with hindsight, why I wanted to make life any more complicated. This type of event card is almost always of more annoyance than anything else to the players. 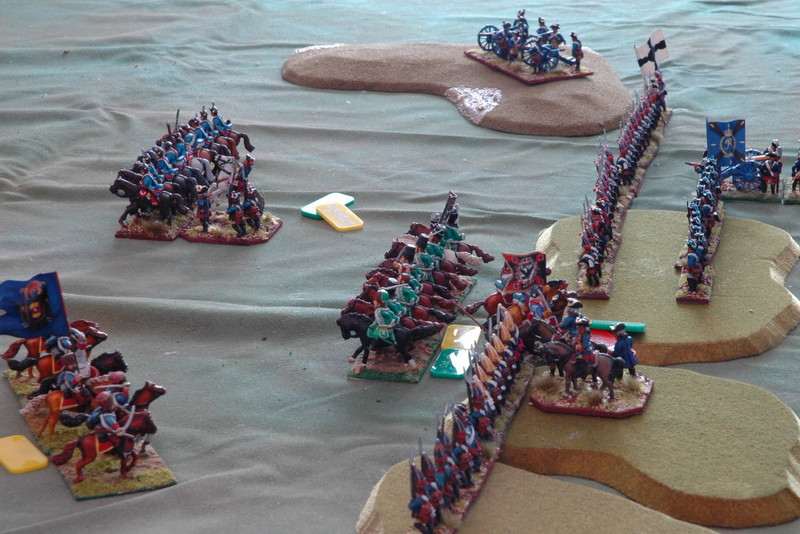 As ever, the most careful scenario planning doesn't survive contact with the enemy, ahem I mean players. Piquet allows a wide variety of outcomes as the uncertainty of the randomised turn sequence and dicing for initiative gives a selection of fine lines between success and failure and the extent of either. An example from the game was the Allies desperate search for the card in their Sequence Deck which would allow their marching cavalry to deploy. Not only was it the very last card in the deck but they turned it with the last pip of initiative so couldn't even act upon it as the turn came to an end!

I will leave the after action reports to the players  to write. Some of the key events from my view of the action included the heroic Reichsarmee dragoon regiment that was the lone survivor of the vanguard brigade and repelled three charges by Prussian dragoons, two of them led in by General Seydlitz himself.  This anchored the centre of the Allied line and was crucial in holding up the rampaging Prussians and allowing deployment room for the rest of the army. The other was near the end of the game and was symptomatic of the way things had panned out. The French Regiment Diesbach (Swiss) took a devastating volley from Prussian Grenadiers but stood and returned fire to less effect and then against all the odds the remaining fraction of the regiment charged their elite opponents with the bayonet and put them to flight! The is the sort of event on which regimental reputation and legend are made. 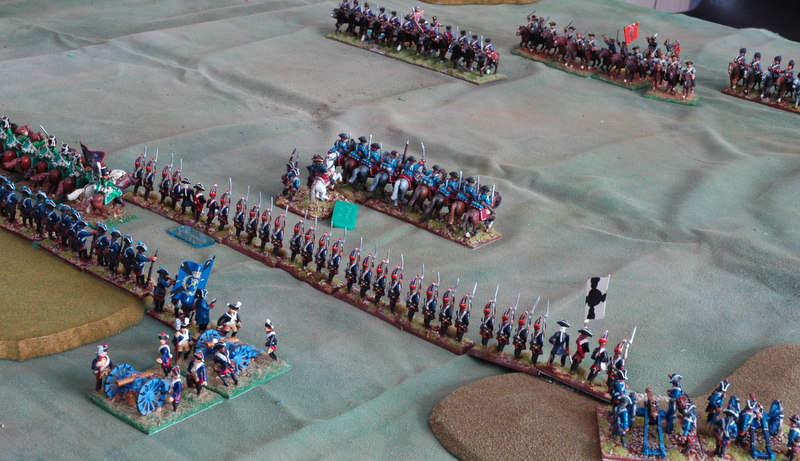