The Battle of Rossbach, Part 2

In our version of 1757 the Battle of Rossbach, (Part 1 here), did not pan out exactly as the overwhelming Prussian victory that could be expected. Unfortunately there are no first hand accounts from the participants (the lazy sods!) However the aftermath of the battle is recorded.

As the day of the battle drew to a close the Prussians, who had found it impossible to capitalise on their early success against the mounted vanguard of the Allies, were faced with a mass of French infantry well supported by cavalry and guns, marching towards their ad hoc battle line. The Prussian ambush had run out of steam and worse, one of their elite Grenadier regiments had been put to flight by the heroic Swiss of Regiment Diesbach. Only on the Prussian left were they having some success, as disciplined volleys were cutting down inferior Imperial regiments. Frederick had a difficult dilemma; stand and fight and risk his veterans being roughly handled, or attempt to break contact with the Allies and get his army to Silesia where they were desperately needed.

The choice was taken out of his hands when, against all military logic, General Soubise ordered a withdrawal of the French part of the Allied army. His decision could easily be justified by the imminent collapse of the Reichs regiments, holding his flank and the large formation of uncommitted Prussian Cuirassiers that were advancing to perhaps exploit the gap. The Reichs General Hildberghausen was predictably furious at this “betrayal” and loudly (and correctly) bemoaned the lost opportunity to cause real damage to Frederick’s army. Soubise however was acting in perfect accordance with the orders he had recently received from Versailles; to withdraw his entire force across the Main into winter quarters. So, the Prussians held the field although could hardly claim a victory.

Frederick however was not content to slip away to the east with the French retiring unmolested, a spring in their step and success against the vaunted Prussians to warm their hearts through the winter. The Prussian army watched by a few curious hussars marched east but once masked by the Janus hills did a 90 degree turn to head back past their original lines and towards the retiring Allied army. A hard march would be needed to catch up with the French column but with surprise on their side the entire enemy force could be at his mercy!

In fact the Allies know they are coming. The Austrian General von Loudon and French General St. Germaine have persuaded General Soubise to allow them to attempt to counter this Prussian thrust. Soubise has agreed with the warning that there will be no reinforcements or assistance if things go badly. (There is a small chance that disorganised remnants of the Reichsarmee might make an appearance.)

The Allies drew 32 Morale Chips, an extra Heroic Moment card and a Strategem - reinforcements! Those Reichsarmee Imperial troops will be making an appearance after all (5 units in D6 turns after the Strategem card is turned.)

The Prussians drew 43 Morale Chips and an extra Infantry Move card. Also when rolling for their basic value dice (BDV) four of their eighteen units ended up with the maximum value of a D10.

The Prussians attacked in two directions from either side of the town of Groest. One column heading for the Zeuchfeld – Branderoda road the other for the Austrian rearguard deployed along the rocky slopes of Almsdorf Hill. The screening command of light forces and garrison regiments also headed towards the Austrians from the other direction. As the Prussians deployed in the open ground with their typical clockwork, precision, a nasty surprise became apparent. Sited on the crest of the ridge was a battery of French artillery unlimbered and with linstocks poised. The Prussian attack had clearly been anticipated… Worse was to follow. Cavalry flanquers and staff gallopers reported in that beyond the ridge lay a fully formed French army arrayed in battle formations and facing the direction that the Prussians were approaching from! 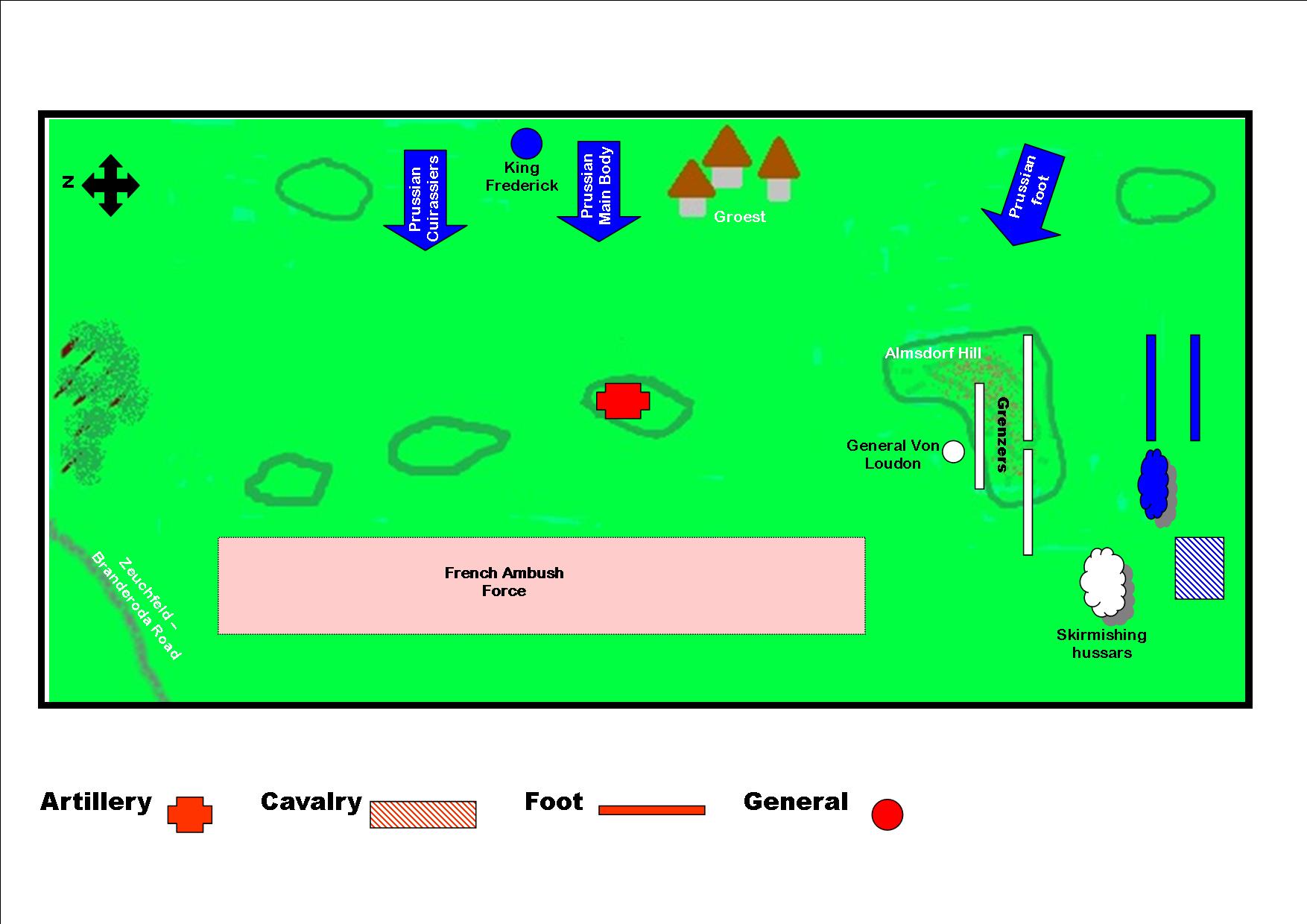 Initial deployments on the table.

General von Loudon was forced to deploy his Grenzers across the Almsdorf Hill facing south, as any sign that his force was expecting the actual Prussian axis of attack would give away the element of surprise that the French were relying on. The Prussians tipped their hand as to their strategy when they pushed their light screen up close to the deployed Grenzers. It was then no surprise then when a command of Prussian elite foot regiments was hurled at the open flank of the Austrian command. 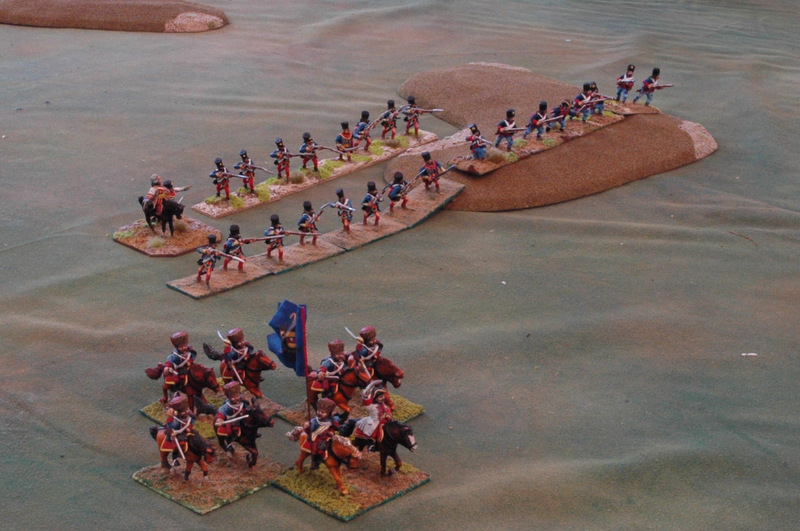 Despite being the cream of the Prussian assault force, the soldiers sent to root out the massed Grenzers on the Almsdorf Hill found themselves facing a difficult climb up the rocky and precipitous slopes (a type 3 hill in Piquet.) As the rigid line of Grenadiers sought a way up the side of the hill, the Grenzers at that end swung around and commenced to pour a murderous fire down on the brave Brandenburgers. Some veterans and non-commissioned officers tried to scramble up goat trails to get at their tormentors but, even if not up to the standards of a Prussian parade ground, the Croat volleys were very effective at cutting down all these attempts. After an hour of torment the Grenadiers had ceased to exist as a fighting force. Refusing to flee or take cover they stood in the withering fire until their supports shouldered their way through the pitifully depleted remnants to take up their turn in the attack. These veteran musketeers traded volleys with the Grenzers and started to whittle down their close-formed line. Slowly they worked their way closer to the enemy line; the routes up the hill were now visible, marked by the sun gleaming off the mitres of fallen grenadiers.

On the other side of the hill the Freikorps and Free battalions pressed on towards the Austrian rearguard. On their left the Prussian Szekely Hussar Regt raced towards their Hungarian opposite numbers who rapidly gave ground, although riding forwards in small groups to try to slow down the Prussians with potshots and skirmishing. The Prussians were not to be halted however and once the elite Hungarians found themselves pushed back upon their supporting heavy cavalry they had no choice but to reform their ranks and charge! The hussars caught Regiment Szekely at the full gallop but it did them no good. The compact formation of Prussian horsemen cut straight through the Hungarians, putting them to flight. Worse was to come. The immaculate Prussians reformed their ranks and charged again into the Austrian Cuirassiers of Regiment Tratmannsdorf, who had turned to counter their assault. The cuirassiers, who had been roughly handled two days earlier, counter-charged the rampant hussars but despite all the orthodox opinion they were soon, too, streaming away in defeat. [As a word of explanation for this unlikely double victory, the Prussian hussars had rolled the maximum value for their Basic Dice Value (BDV) - a 20 on a D20, so started with a distinct advantage over their opposition despite any apparent disparity in weight or tactical situation. Added to this the Austrian cuirassiers had been automatically rated as the worst BDV – battle weary, to recognise their being broken in the previous battle. Also the Prussians rolled nice high numbers on the dice which always helps.] 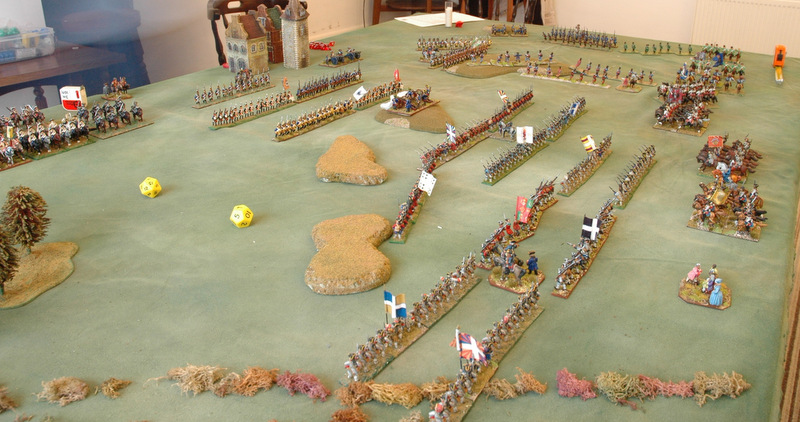 View along the French lines, the Prussian cuirassier brigade to the far left and in the distance the fight over the Almsdorf Hill.

North of the Almsdorf Hill the other half of the Prussian army advanced on the newly discovered enemy army. Five battalions assaulting more than twice their number; a magnificent sight! However much disdain Frederick had for the soldiery of his French opponent, he could not ignore that the French battery was soon cutting bloody swathes through the neat lines of the Prussian musketeers. The leading battalion march straight into the muzzles of the guns only to be reduced to ruins by the frantic salvos of grapeshot hurled by the enemy gunners into their ranks. As he urged his troops forward General of Infantry Fuerst von Anhalt-Dessau was stuck down by randon ball and carried from the field mortally wounded, a terrible loss for the Prussians. Despite this the Prussian attack passed by the battery like a tide lapping around a stubborn rock and the brave French gunners kept up their devastating fire throughout the rest of the battle. 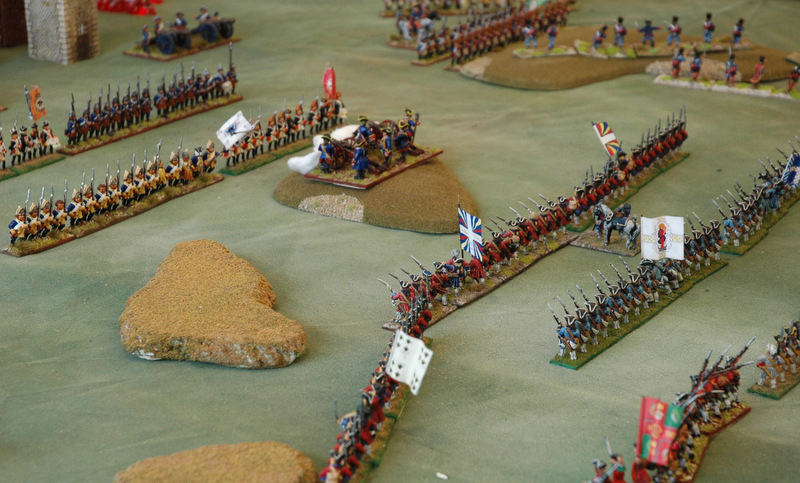 The French guns looking very isolated as the Prussians advance.

The setback to his infantry may have been what caused Frederick to launch his brigade of cuirassiers at the steady line of waiting French foot but then again if ever there was a finer body of cavalry they too must have been favoured to sweep away the opposition with their charge. The Prussian squadrons advanced in turn as they crested the ridge. Only a thin shell of Swiss and German veterans stood between the galloping horsemen and the easy pickings of the inexperienced French second line. But stand they did. Loosing close range volleys and fending off the survivors with their gleaming bayonets. The remnants of the Garde du Corps regiment did charge through the fire and sabred down the Swiss of Regiment Wittmer but this was the solitary success of the day for the Cuirassiers. It was during these charges that Major-General von Seydlitz had his horse shot out from under him and was too badly injured to take any further part in the battle. [The loss of a second general was a dramatic blow for the Prussians. Under Piquet their sequence deck would now be losing a card permanently every turn, representing the permanent damage to the army command. Two generals meant two cards lost per turn and Seydlitz Brilliant Subordinate card. The Prussians would be finding it much harder to do what they wanted when they wanted from now on.] 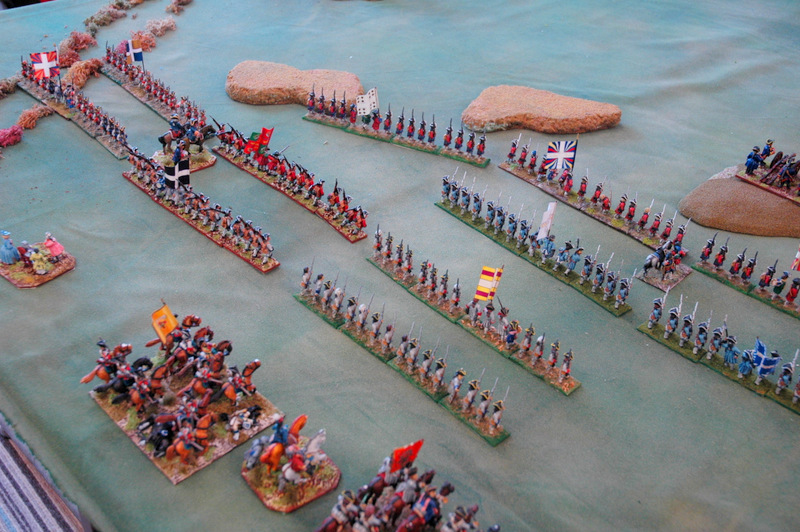 The French had their weaker infantry in reserve and enthusiastic if outnumbered cavalry in the rear.

Now the Prussian infantry got to grips with their French counterparts and in the close range firefight their drill gave them the advantage. Also, on their left the Austrian Grenzers had finally been evicted from the top of the Almsdorf Hill. This had come at the cost of almost half of the assaulting Prussians and the death of a third Prussian general! The carnage amongst his senior officers and the sight of Austrian cuirassiers charging through the gap in his lines, chasing routing musketeer,s was enough for Frederick. He ordered the recall to be sounded and the Prussians extricated themselves (with great difficulty) and marched back the way they had come.

This was an interesting game to plan. The Prussians had the advantage in quality in horse, foot and guns, and I was getting quite nervous about the Allies prospects as the soldiers were being organised out of their boxes. However the faulty Prussian intelligence did catch the Prussian players unawares and I suspect they would have chosen where they attacked differently if they had known they were facing a numerous and well-organised enemy army. As it was, the choice to send one of the infantry commands to assist in rooting out the Grenzers on their steep hill fatally weakened the main Prussian attack and it was too damaged once the task was achieved to materially affect the rest of the battle. A facinating game. 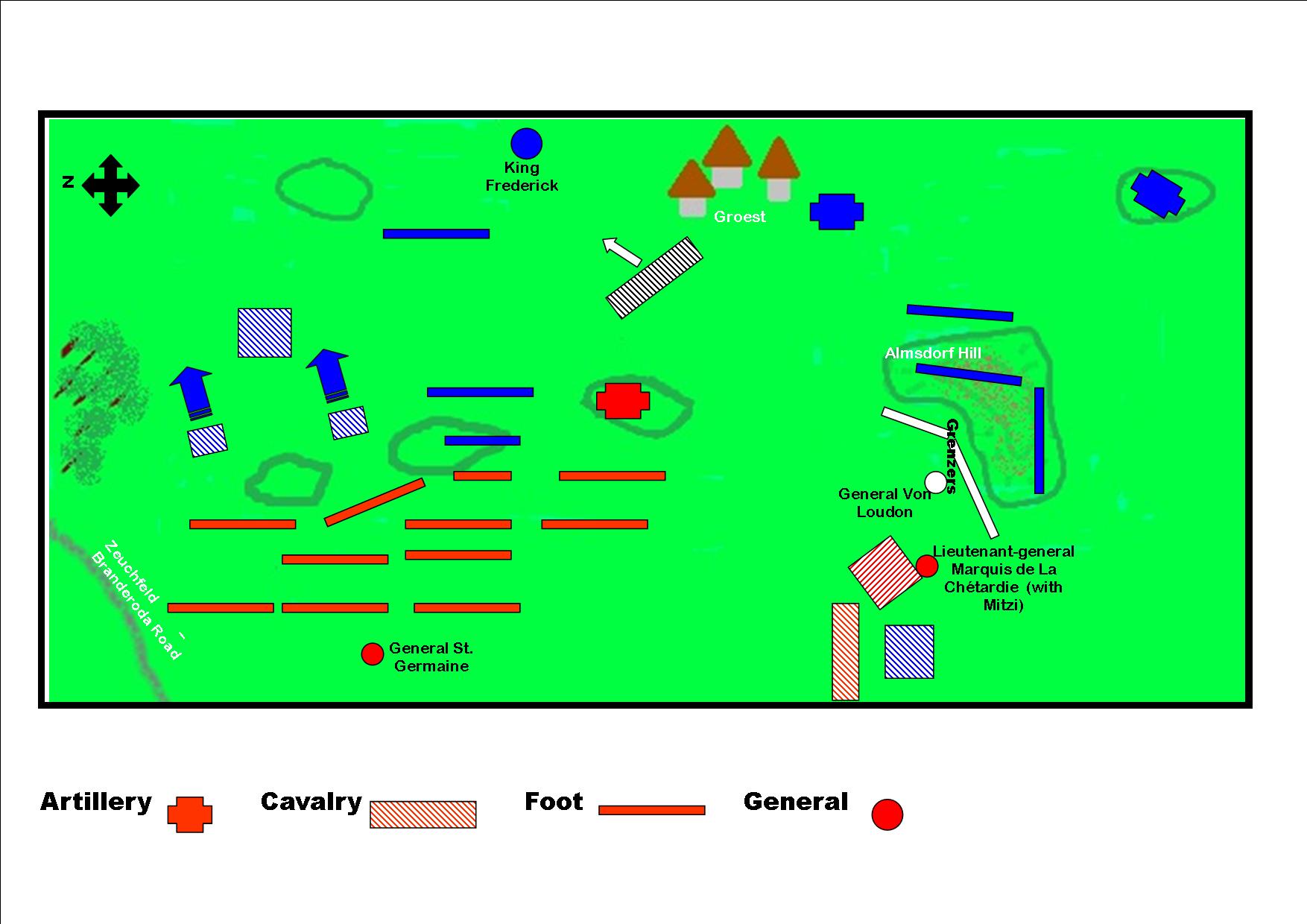 The final dispositions before the Prussians were forced to throw in the towel. 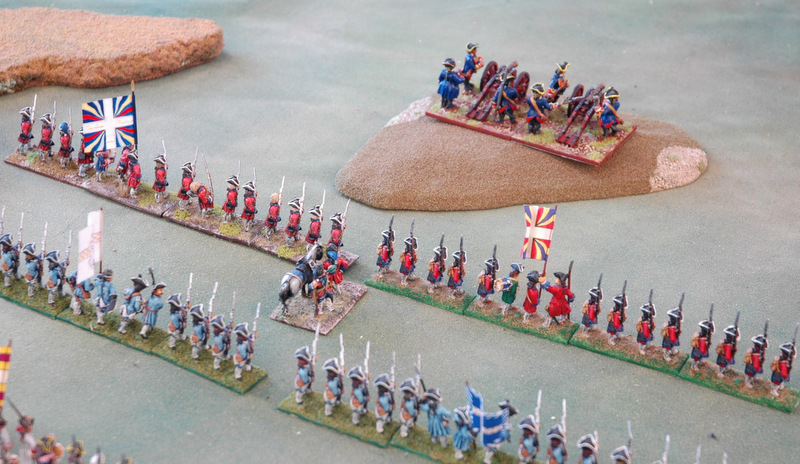 The lone French battery of medium artillery were undoubtedly one of the deciding factors in the battle.