Return to the Punic Wars

The wars between Carthage and Rome, being a period several of us have gamed for many years (decades in some cases!) we have sizable collections of figures available to set up scenarios with. However, now  we say a sad farewell to the veterans who have made up the lion's share of the Roman armies, as they march off into exile with their owner Mr Skinner (AWOL.) 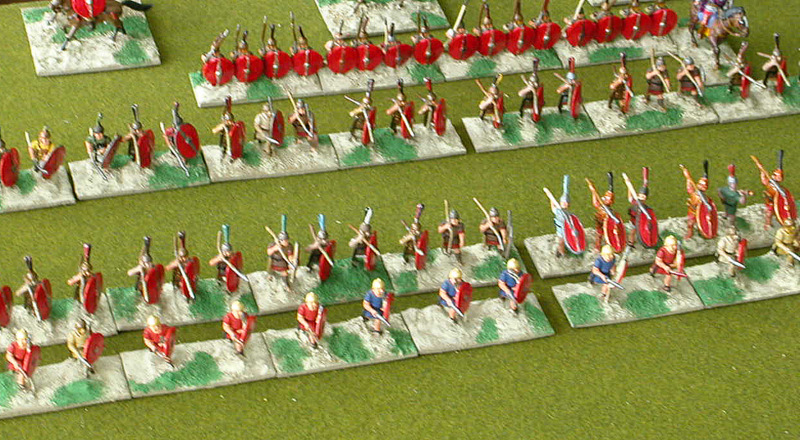 Mainly Minifigs and Garrison figures I suspect, with a scattering of newer ranges too.

As the owner of the next largest Roman force I am feeling under pressure now to replace the absconding legions with units to bring my own army up to strength. I already have the figures in the leadpile so there is no financial hardship involved; just a re-jig of the painting queue. (This probably pushes my 16th C. Italian Wars project back towards the end of 2014.) My Republican Romans are in the main Wargames Foundry figures and are in my opinion still one of the best and most accurate ranges out there for this period (sculpted by the Perrys or Dave Gallagher I'm guessing.) . Compared to the 32mm+ size that new figures are turning up now, these guys are on the small side being "only" 27-28mm to the top of their heads. The detail is superb even including the engrave edge of the ontefortino helmets. I have command figures froma variety of sources (Gripping Beast, Navigator, 1st Corps and Crusader) to bring each unit to life with some individuality. I have the 4th Legion completed  - 7 units of infantry in Piquet, and a couple of units done for the next Roman legion. This weekend I finished the cleaning up and gluing together ready for undercoating for the Triari and another unit of Hastati.