Our latest game was a re-run of part of the large Punic Wars game we played last year. On the previous occasion we played through the initial ambush part of the game but did not have the time to fight the head of the Roman column versus the blocking Carthaginian force.

This version started before the Romans had managed to cross the river and was the first outing of our new (much wider) river.  The Romans had two full legions formed up on the table and a promise of reinforcements coming in turn 4.  Opposing them were 34 units of Carthaginians, comprising mainly Spanish Scutarii and close order spearmen (presumably Libyans/Liby-Phoenicians.) These were formed up in depth in the gap between the woods, facing the Legions and also as a flanking force threatening the Roman left. Thus the Romans found themselves outnumbered 2 to 1 (at least at the outset) the only bright point being that there relatively few Carthaginian cavalry to be concerned about. 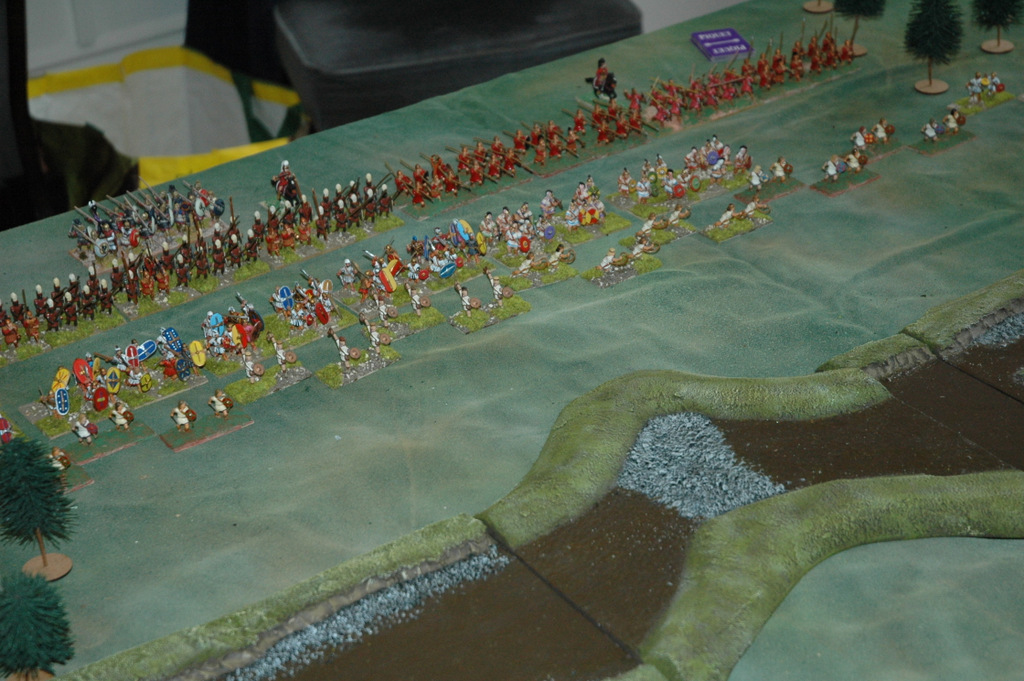 Facing such odds and a river in the way the Roman commander decided to discard convention and attack! (That flanking Carthaginians were preying on my mind and the quality of the reinforcements did nothing to inspire waiting around!) The Romans were deployed in Triplex Acies with both flanks resting on the woods and the legion cavalry following on behind the Triari. As they pushed forwards one legion’s worth of Triari wheeled to face the woods on the left with support from the cavalry. They would have to deal with the flanking attack when it turned up. 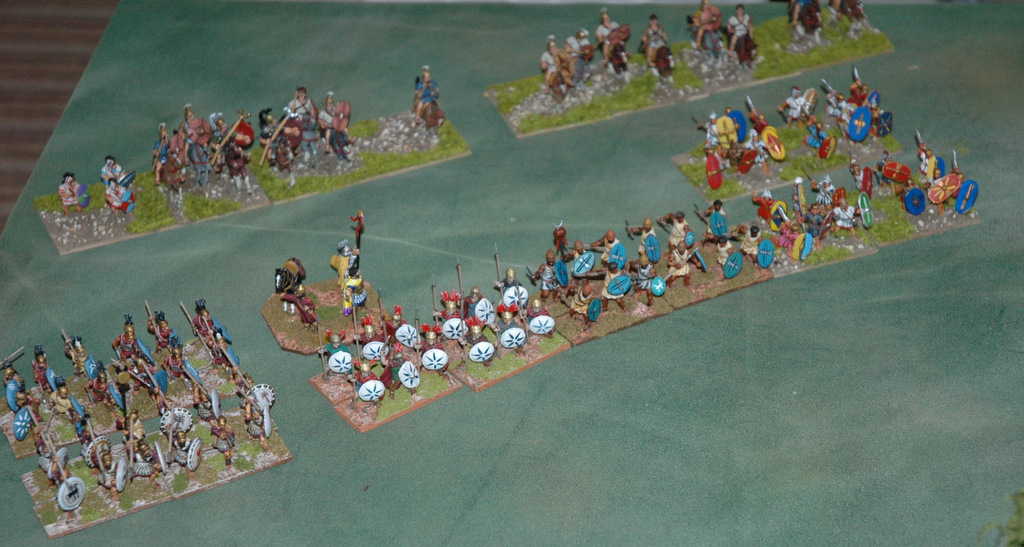 The advance was swift and soon the Velites were wading across the shallow river. They faced a tough fight when they exitted the opposite bank; Balearic slingers were thrown back but the fierce Spanish Caetrati defeated half the skirmish line and the Hastati were forced to move up and deal with them.  In their wake fierce warbands of Spanish Scutarii hurled themselves at the Roman lines. Their deep formations crahsed into the thin line of Hastati but before they could cut their way through the Legionaries they received devastating volleys of pila. This disrupted many of the barbarian charges before the Romans set to work with their short swords.  The savage fighting eventually ended with all the Spaniards thrown back or fleeing but at the price of all the front ranks' pila and with half the Hastati needing to be relieved by the following Principes. 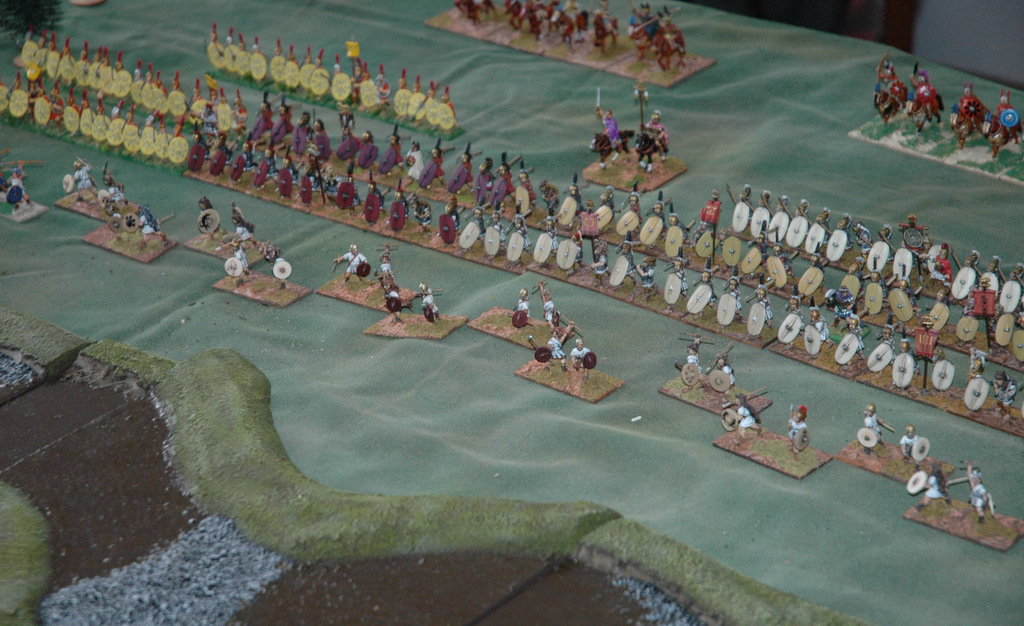 It was now that the survivors of the other Roman legion arrived unheralded behind their comrades. A welcome reinforcement, unlikely to get tto the front lines and do any fighting  but bringing new heart and fortitude to the front lines (and 14 morale chips! ) The depleted Legions were however within a short march of the last line of the Punic army, an unbroken phalanx of densely packed Punic spearmen. Many of these were well equipped veterans, easily the match for Roman legions. After a brief pause to reorganise their formations the Romans continued their advance. 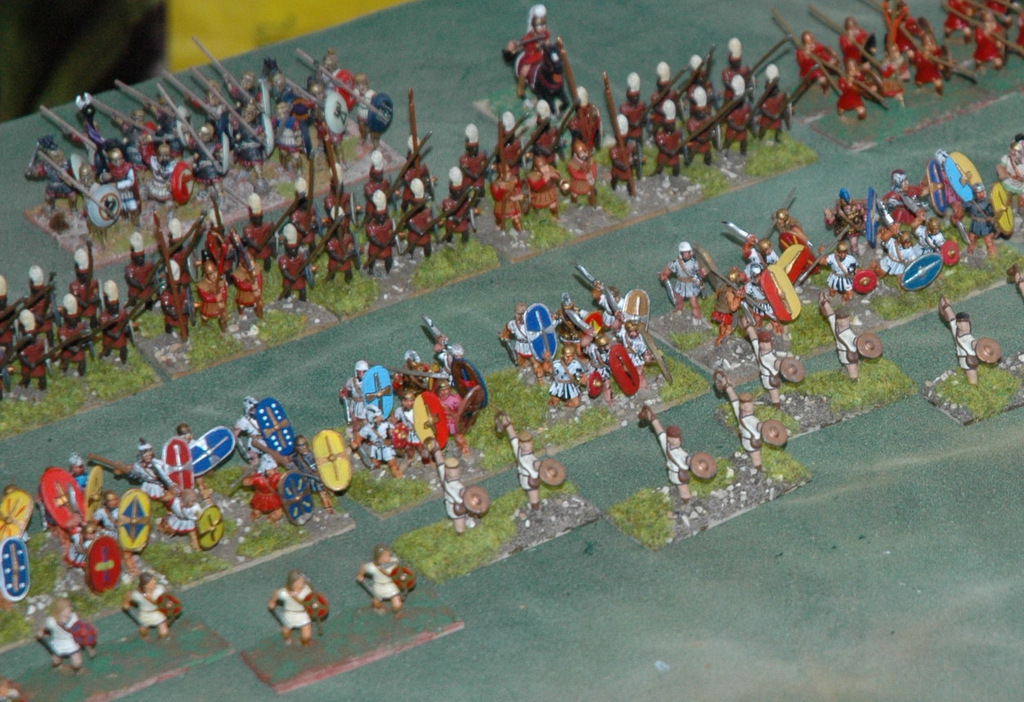 It was now that the flanking force arrived on the left of what was now the Roman rear. Six units of infantry and two of cavalry were advancing against a rearguard of one unit of Triari and one of Equites. The leading units of Spanish mercenaries advanced into contact with the Romans and checked to find out their basic combat values. Naturally they discovered that they were the absolute cream of the Carthaginian army a D8 unit and a D10 unit (a 20 on a 20 sided dice.)  The fierce Spaniards charged home only to be repelled and routed by the brave Triarii!

With more Roman reinforcements arriving all the time the Punic spears nearest the main Roman line charged for glory and with numbers, depth and impetus on their side looked like acheiving it. The gods of fortune had decisively swung behind the Romans however, as Scipio's veterans broke twice their number of Carthaginian units breaking through the enemy battle line and winning the day!

As usual we were playing Archon 2, a Piquet supplement and as usual it gave a gripping battle. As the Roman commander I felt the situation was hopeless from the outset and my ability to throw 1s on any dice you care to mention (including D12s) was starting to confirm the assessment! The initiative came my way at the crucial moments though, allowing the Romans to use their one-shot pila volleys to good  effect. This and their line replacement enabled the Roman attack to keep up its impetus and despite the cavalier use by the Carthaginians of their huge pile of morale chips, the battle slowly tipped towards Rome. The climax of the battle when the Romans had cut their way through to the best of the Punic troops, and the flank attack finally arrived,  was decisive in the main due to my dice rolling coming good; I managed to roll only 7s and 8s on an 8 sided dice for the final six combats.

Reply Hanni
1:36 PM on May 4, 2014
Good write up, although I thought you weren't doing it ? Waiting for the organiser was expecting a bit much I suppose.