The Truceless War was the conflict that occurred between the 1st and 2nd Punic Wars when Carthage made a disasterous hash of paying off its largely mercenary army. The mercenaries mutinied and things soon turned bloody when they ransacked Carthaginian towns and the Libyan subjects of Carthage revolted and threw in their lot with the mercenaries.

This war had always seemed like facinating subject matter for a wargames campaign and offers an interesting mixture of troop types that we already have available from our Hellenistic and Punic Wars collections. The absence of the Romans (apart from their historical small and late intervention) should make battles less formulaic and wide open too.

I put together a simple boardgame style set of campaign rules taking some ideas from Piquet's "Theatre of War" campaign system (the reason I did not want to just use ToW is that as a card driven system it is difficult to use as an ongoing email campaign; the players really need to be in the same room, which would eat into our gaming time.) Another Piquet system that I drew on heavily is the Band of Brothers army generation mechanism, which is called "Beat the Drum" (BtD.) This uses a standard playing card deck to select an army from a roster up to a preset total of points (they call them Florins.)

I like this as a campaign mechanism as it allows armies to be recorded as a points total without keeping track of individual units with any particular force. In BtD the spades cards that are drawn are used to upgrade training and weaponry if points have been allocated in these areas, otherwise they are wasted cards. I used the spades column on the roster to incorporate supply, diplomacy and the chance of mercenaries desserting. I wanted these issues to be a bit abstracted but an always present factor for the players.

I scribbled my rules and the army generation tables down, borrowed a part of the map from the excellent boardgame Hannibal by Valley ames and handed it out to the players. I didn't get any negative feedback from our little group (I am sometime not sure they can even read mind you...) So the campaign was kicked off and the players pondered and eventually handed in their first week's orders. I took on the role of Hanno the Great (not so great historically) so that we would have 2 a side. I started by stitching up my fellow Carthaginian general, Hamilcar, by swearing blind I was going to stay in Carthage that turn and promptly marched out with the garrison to attack the nearest Mercenary rebel.

The neighbouring city of Utica was in a state of unrest which made it vulnerable to swapping from Carthaginian controlled to backing the Mercenaries.  The presence of a Mercenary army outside its walls under Spendius the Italian increased this chance too. I decided that the loss of resources represented by this city was too great a chance to take, thus the headlong attack by Hanno. Luckily for Hanno/me, the Mercenary players had split their resources almost equally between their three active generals and Spendius had spent less than half his share in recruiting soldiers. Knowing only the total value of the releiving force (including supply, diplomacy etc.) Spendius decided to stand firm and try to repel the enemy  to maintain his siege.

Hanno's 3 points of recruitment gave him 30 Florins to generate an army on the BtD table (here.) His other points had gone on Pay: 1, Diplomacy: 2 and Supply: 1.

The cards were kind for Hanno and the army generated included 10 cheap but effective units, including 2 of elephants! The spades drawn were more of a mixed bag.

Supply: 50% of units out of supply!!! (Obviously didn't realise how much fodder elephants require on a route march!)

Spendius' 2 points gave him 20 Florins to spend on the table (here), which gave him: 2 units of Numidian cavalry, 2 units of Libyan spearmen (one of them levy) and a unit of Spanish Scutarii. The spades gave

A strategy: Heroic commander. The sole Mercenary sub general is an inspiring commander, no units need take a morale test whilst he is on the field but he is at greater risk of dying if he leads a unit in combat. Useful against those elephants... 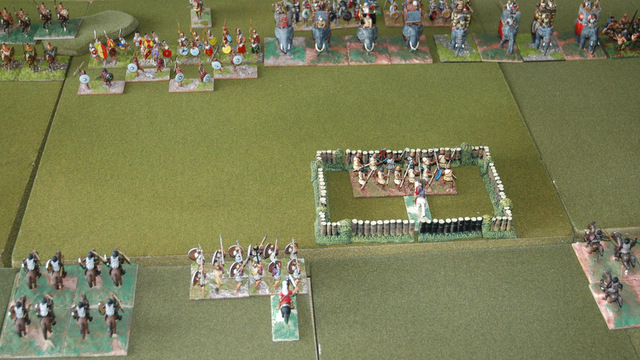 A tall order for the Mercenaries to hold the field, even with their pallisaded camp to defend and to make it worse I forgot to include their Spanish unit on the rosters (doh!)  The game was short and just about as disasterous as it could have been!  Half of the Mercenary Numidian cavalry were chased off the battlefield by Keltic foot warriors and the other half slowly engulfed by enemy cavalry whilst they sat there ineffectually. The elephants (despite being weakened by their lack of food and water) stormed into the Mercenary camp and trampled all over Libyan spearmen. The charismatic general routed away with them. A counter-attack by Spendius himself at the head of the remaining spearmen sent the elephants packing (and straight back towards the Carthaginian foot) but the Carthaginian Spaniards charged in turn and cut to pieces this final unit and killed Spendius during the fight! 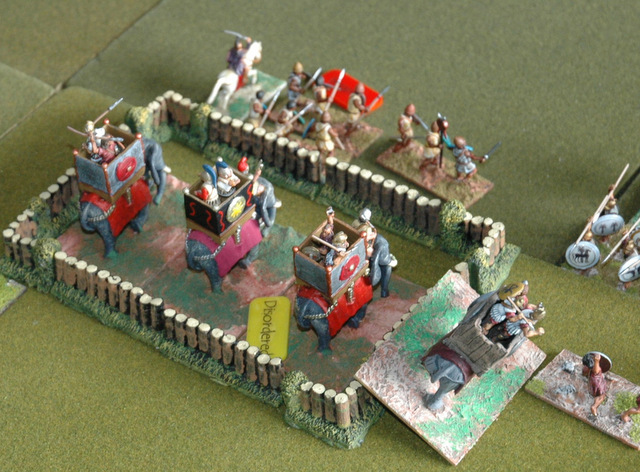 Elephants break into the Mercenary camp.

Luckily for Spendius we will have to refight this one with all the soldiers present. We will perhaps increase the FLorins total to 15 per Recruitment point budgetted so that we get slightly larger games to fight. 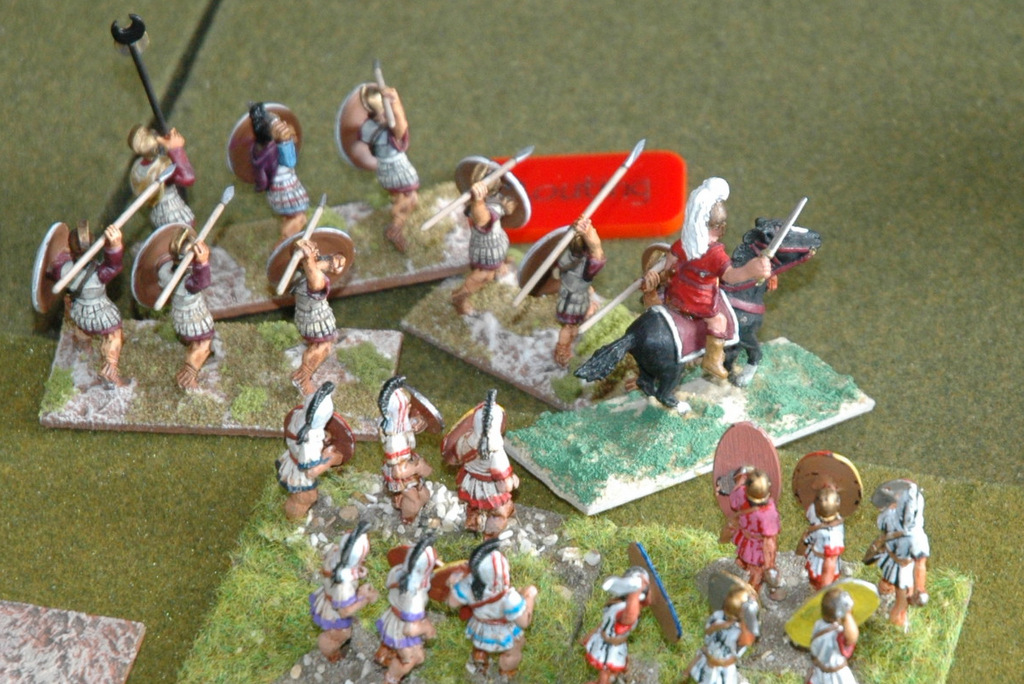 The death of Spendius the Italian?

(As usual click on the images for larger versions.)