As a side-effect of my renewed campaign to finish painting (hah!) my Republican Roman 28mm army, I was reminded of my intention of some time ago to do a comparison article on the ranges of figures available for the army. Since then the choice has increased including two new plastic ranges appearing and the superb Aventine range steadily growing (in size and reputation.)

The following comparison photos will hopefully be useful for gamers wishing to decide on which range (or ranges) will suit them. And which can be mixed together. The photos speak for themselves but that won't stop me from adding my own totally subjective comments.  In the interests on full disclosure my own Romans are mainly Foundry figures (bought back in the Guernsey Foundry days - I know I know, what the hell have I been playing at all these years with them still unpainted...) I have also mixed in a large variety of other manufacturers command figures so that each of my units has a little variation and its own character. I am reasonably tolerant of different sizes of figures in the same unit and certainly on the same table in different units.

I cannot claim the following selection to be exhaustive; I have lots of Old Glory figures but their Republican Romans don't "do it" for me. Crusader Miniature have been neglected for no valid reason, Renegade Miniatures are not currently in production but their range is pretty poor. Relic Miniatures have an interesting Punic Wars range with great detail but slightly odd anatomy/ poses. Also their variable scales within a range just depresses and confuses me! (I would still buy some if they were on the correct side of the Atlantic. 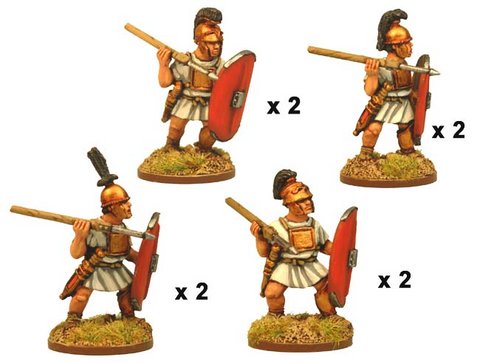 Old Glory - Simply not their finest.

First up two of the newest lines (and arguably best) Aventine and Agema. Aventine are at the chunkier end of the spectrum and have lovely detail. I only have their Etruscans but they are close in the way they are equipped to early Romans so will do for showing the size and style of this manufacturer.  Agema are the first out of the blocks with Punic Wars plastic figures (as well as metals such as this one.) As usual click on the photo for a larger image. 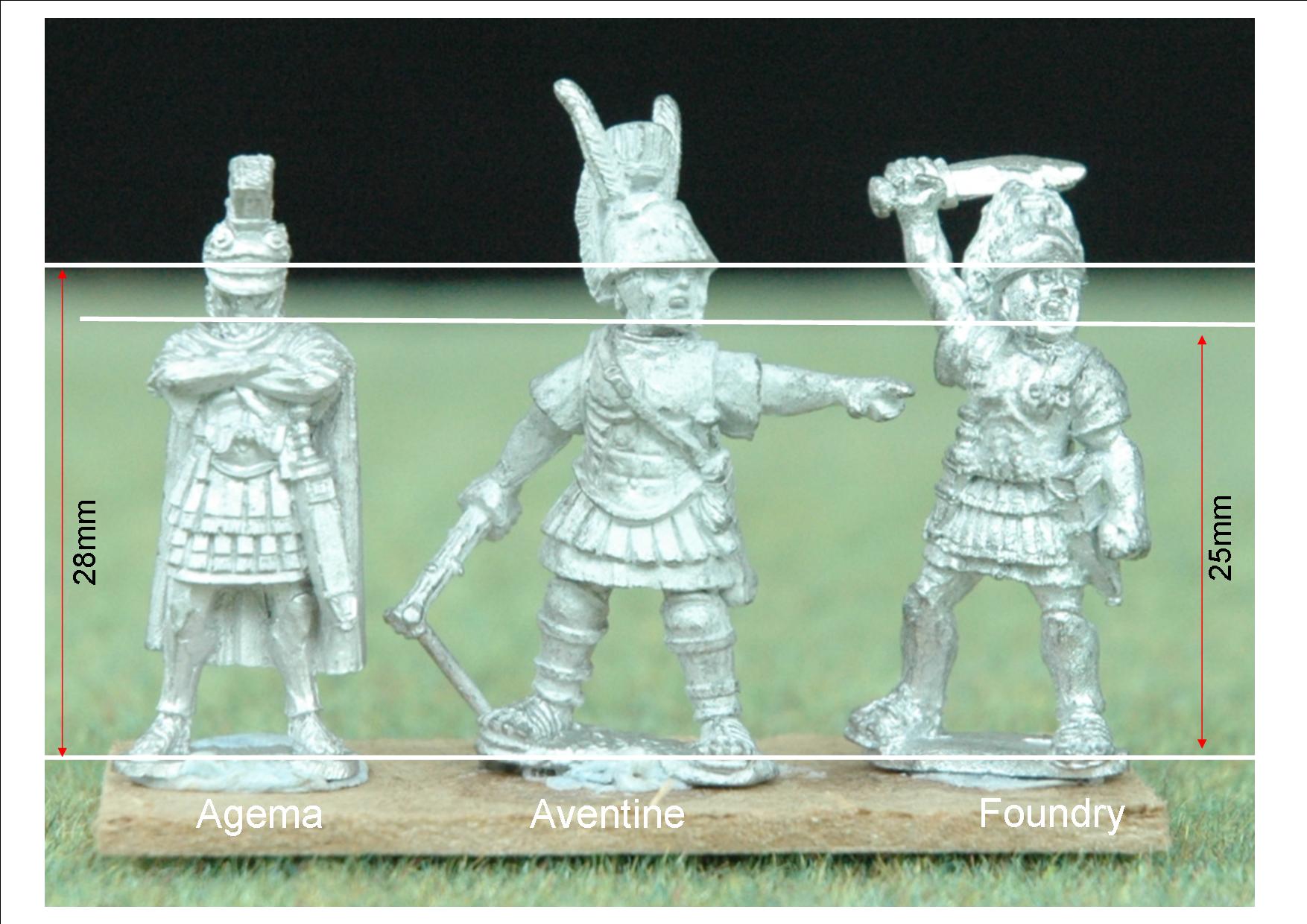 The Foundry officer is a bit taller than the ""grunts" by about 1mm. The Agema figures are the tallest of this batch, 30mm in all but name. They are probably also the most finely detailed - superb sculpting. They are also the closest to real human proportions so don't look so out of place with smaller ranges. 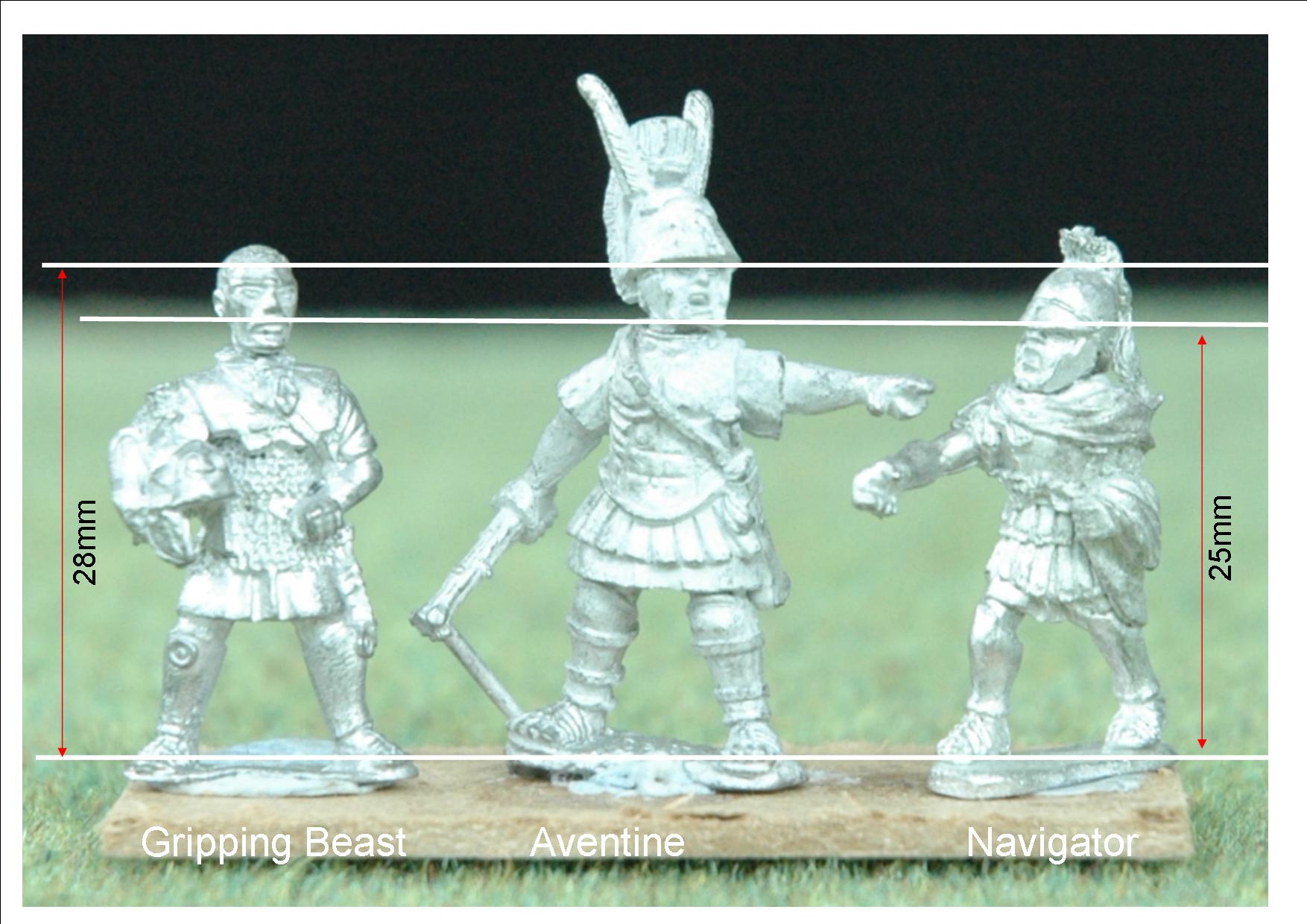 The Gripping Beast officer here looks a bit bobble-headed, but this is the exception in the range; the ones wearing their helmets are more in proportion. Navigator are now owned by Magister Militum.This range is one of the shortest of this batch and the figures range from just about acceptable to excellent. 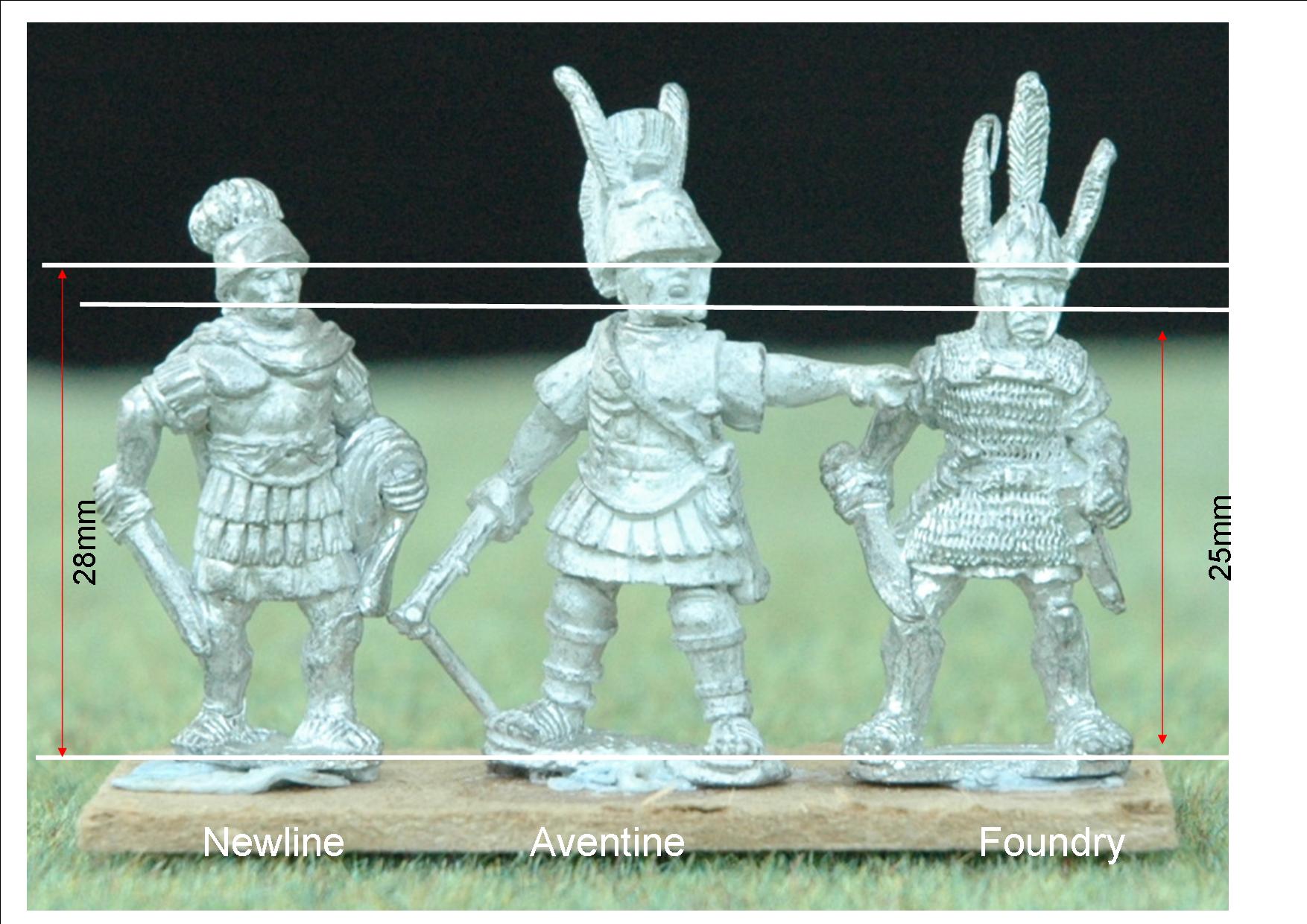 Just to be confusing the Newline Roman here is from the range now sold to SHQ Miniatures, http://www.shqminiatures.co.uk   Newline have subsequently produced a new Polybian Roman range which looks even better, probably around the same size but I haven't had a chance to measure one. The second Foundry officer looks like he would mix in with Aventine quite well. I am a bit surprised by that.... (I may have to do a comparison on the rank and file figures to see how those match up.) 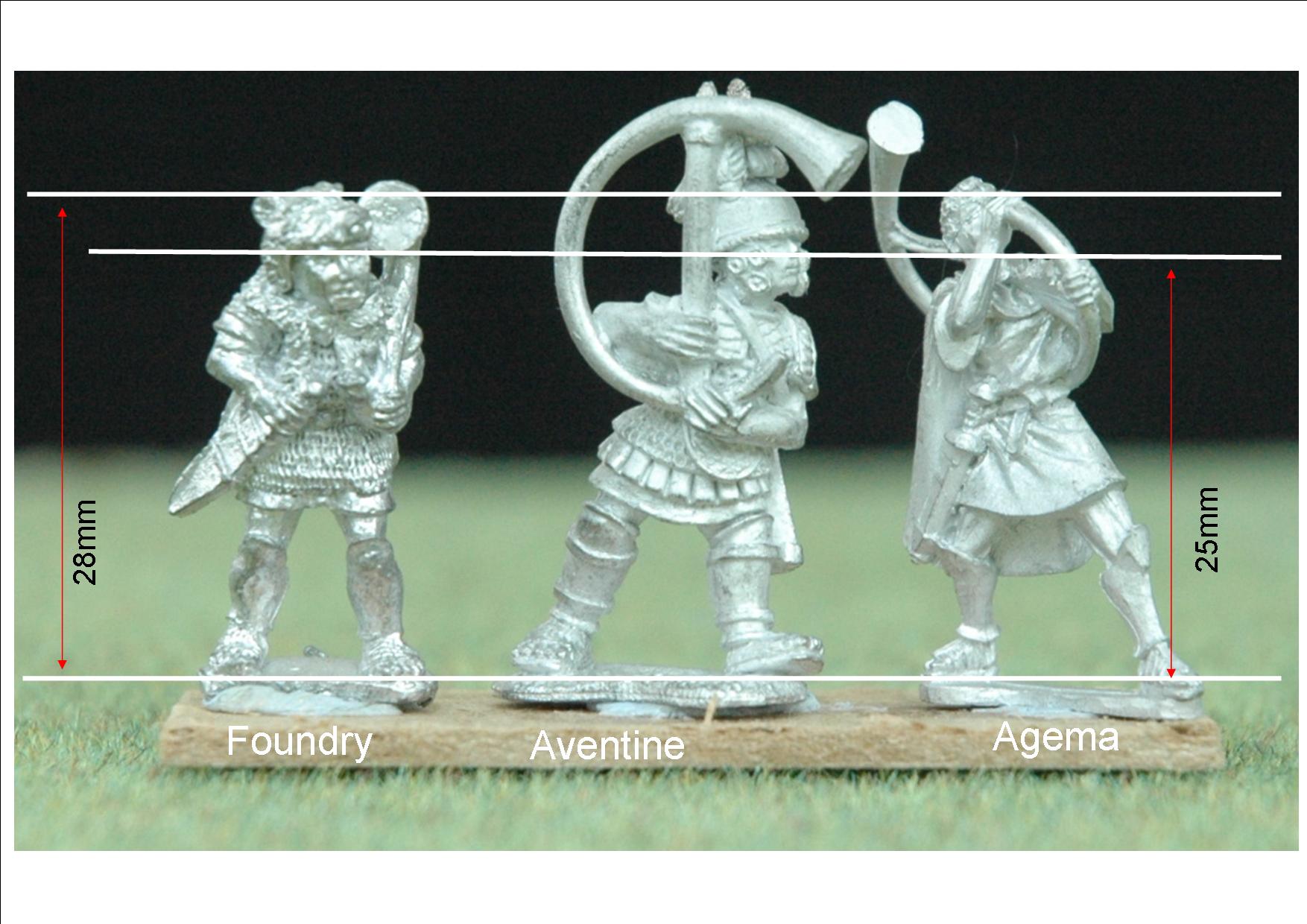 These first three musicians show off again the great detail on the Aventine figures and the terrific posing of the Agema range. The Foundry hornist (?) has the animal skin helmet cover/cloak that is to my mind more of a later style. Here the Foundry figure can be seen to be significantly shorter. 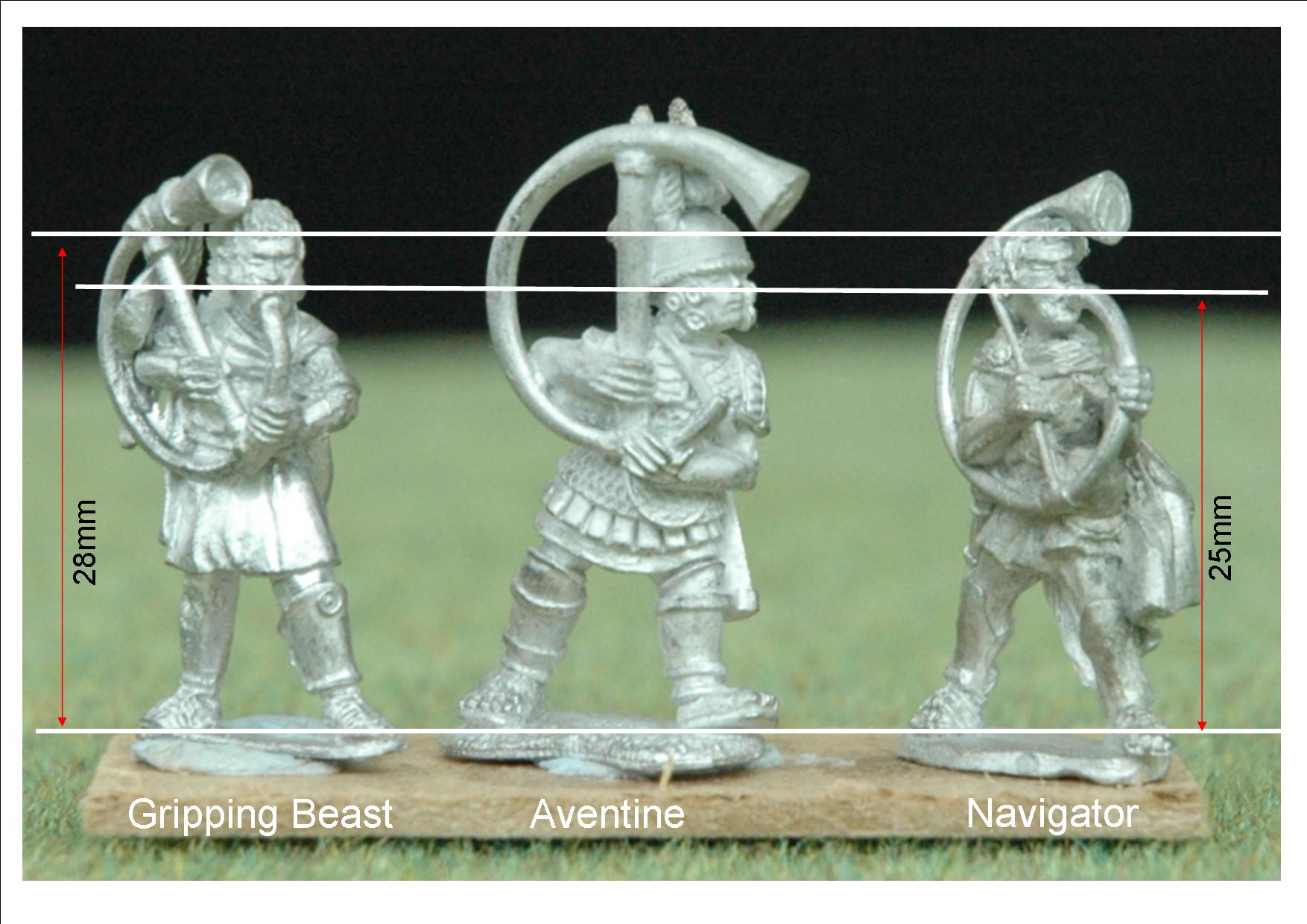 I do like the little details on the Gripping Beast figure like the puffed cheeks ready to sound his horn and the decoration on the greaves. The Navigator version is almost identical with nice fine detail, very easy to paint. 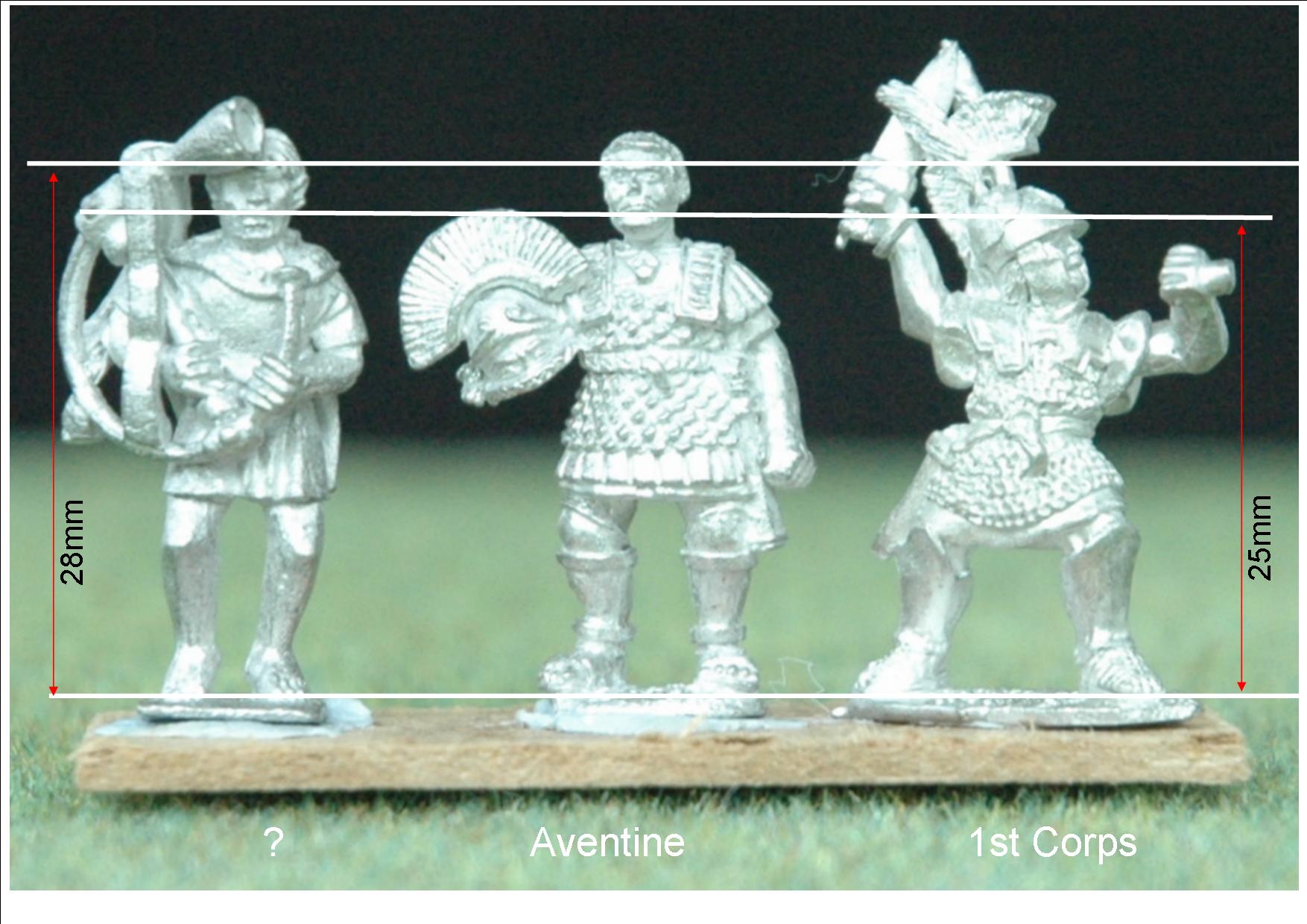 This last horn player I cannot for the life of me remember the make of. A shame as it is a very nicely sculpted miniature. With him is another Aventine Etruscan and a 1st Corps Roman officer. The 1st Corps figures are beautifully cast with good clear detail, maybe a little stylised in pose but full of action. I think they don't look put of place with their taller Aventine cousins, due to their similarly stocky build. I decided it was worth showing a typical Legionary from Foundry next to the Aventine figure as the Foundry officers seem to have a bit more heft than the rank and file.The small Redoubt range look similar in size to Aventine to me, but a bit different in their proportions. Stylistically I think they are a better match for Foundry. 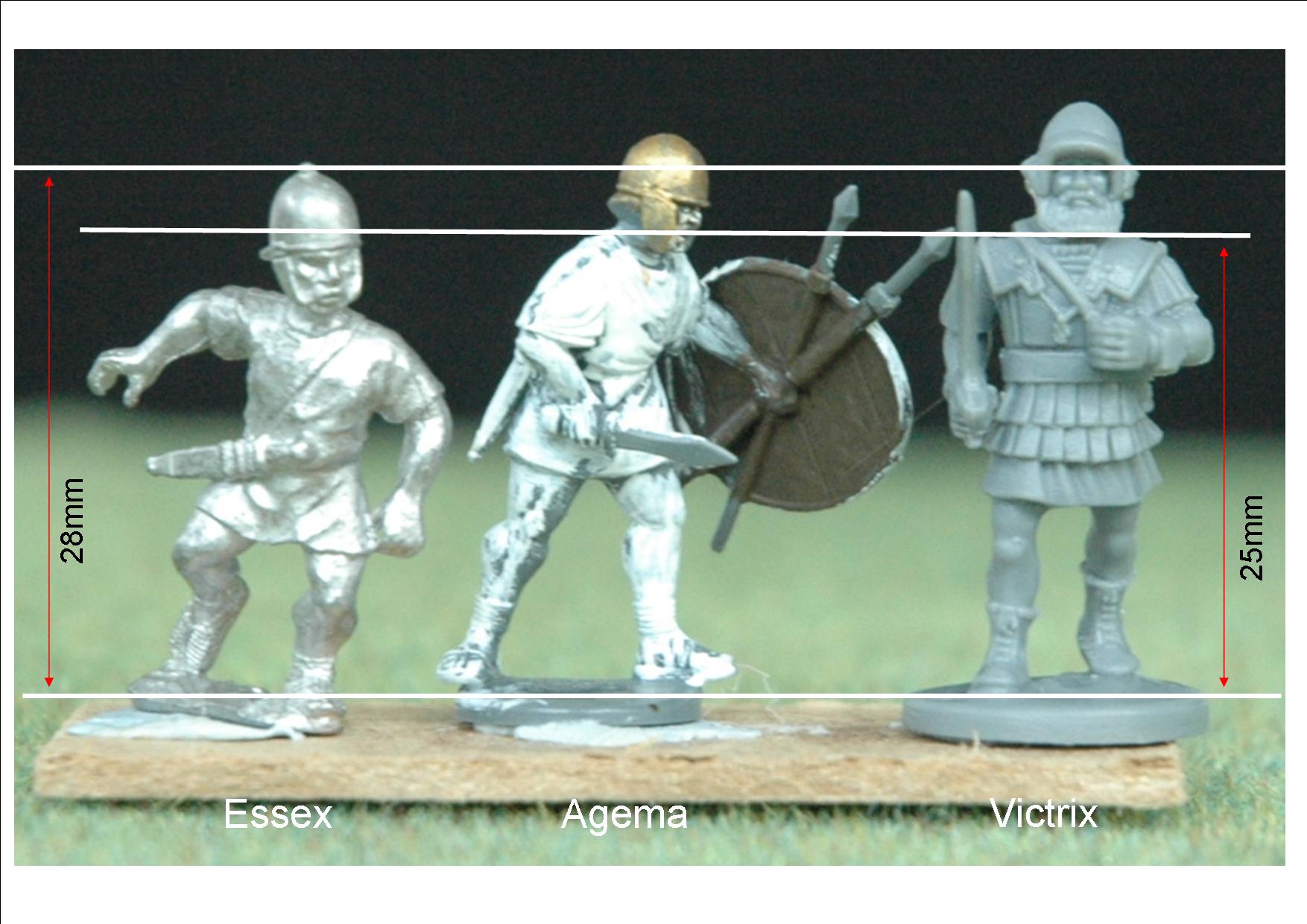 As I mentioned the plastic sets of figures that are coming on line, I thought it only fair to show them some examples. The Agema Velite is, like  its metal stablemates quite tall and slim, less tedious than some plastics to clean up and glue together and a great basis for conversions. (Which IS what plastic figures are for!) As the Victrix Romans are not quite available yet, a Greek hoplite is shown for comparison purposes. Not quite as proportionate but usable together (if not swapping heads and other body parts.)  The Essex Velite is shown as yet another option for this army. These are fairly recent sculpts and whilst on the short side quite nicely done.

There are many "legacy" ranges that contain Republican Romans (e.g.Minifigs, Garrison, Hinchliffe and Warrior) but the arrival of cheap plastic figures means you have to want the nostalgia or maverick, "old skool"  style choice to plumb for these options. There are also several out of production ranges such as the previously mentioned Renegade, "now you see them, now you don't" Companion Miniatures and Sussex/Corvus Miniatures. So much current choice though their loss is not a disaster. Choice can only be a good thing  if gotta have them all tendencies can be avoided (I struggle with that one.) I think that the photos above illustrate that a mixture of ranges can work very well in an army.

Reply Adam
4:54 AM on April 17, 2015
Thanks, glad to be of assistance. Those Aventine figures have excellent detail and should be a joy to paint.