The Battle of Utica

Learning that the allied city of Utica was being invested by rebel mercenaries under Spendius the Italian; Hanno the Great gathered the remnants of his army and part of the garrison of Carthage and force marched to their aid. His army contained a diverse mix of loyal mercenaries (Spaniards and Kelts) and Liby-phoenician horsemen plus additional cavalry formed from recruited grooms and stable boys mounted on spare horses. Also in the marching column were the famous war elephants trumpeting as they walked; making the horses shy and ground tremble.

Hanno had carefully apportioned his meagre treasury, allowing for supplies to be carried for the army. Unfortunately he had miscalculated quite how much water and fodder the elephants would require across the harsh terrain; so when the force hove into sight of Utica half the soldiers and mounts were parched and exhausted.

The Carthaginian army spread across the plain. 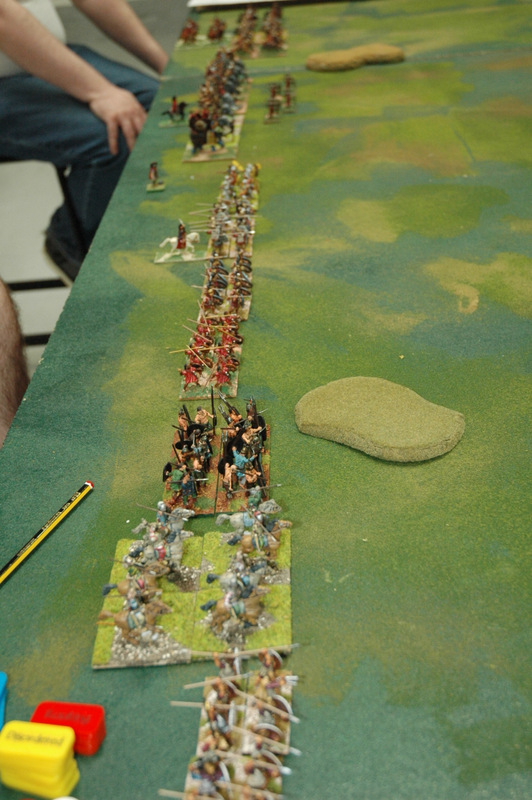 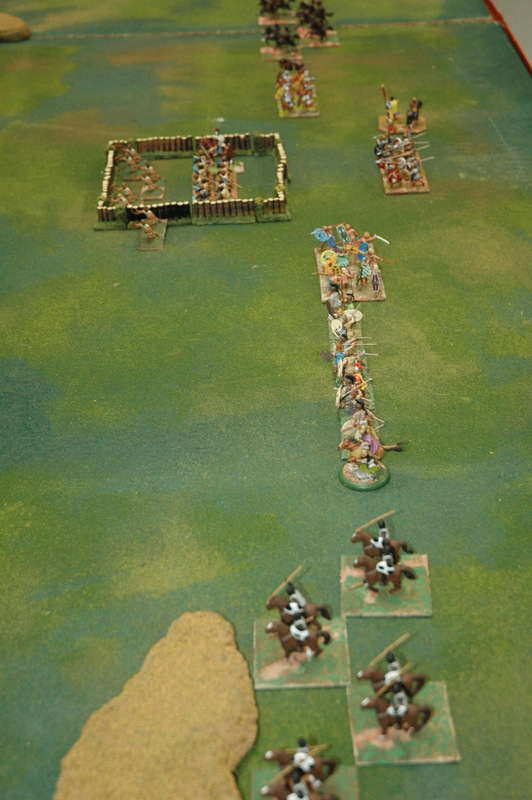 The Mercenary army with Numidians on left and right flanks.

Spendius had been calmly waiting for the garrison of Utica to seek terms, putting the city into his control. However when his scouts reported the presence of the Carthaginian army he responded immediately, bringing his scattered blockade together and forming a battle line either side of his palisaded camp. The mercenary leader found himself in the situation of being outnumbered almost 2 to 1 (14 units versus 8 and having to hold his position if he wanted to carry on investing Utica. The opportunity to retire into the hills being refused, Spendius did have some advantages. His Numidian cavalry were unmatched by the enemy and had the possibility of tying up superior numbers with their hit and run tactics. In addition his deadly Balearic slingers would be able to take a heavy toll on the enemy before they could get to grips with his battle line. 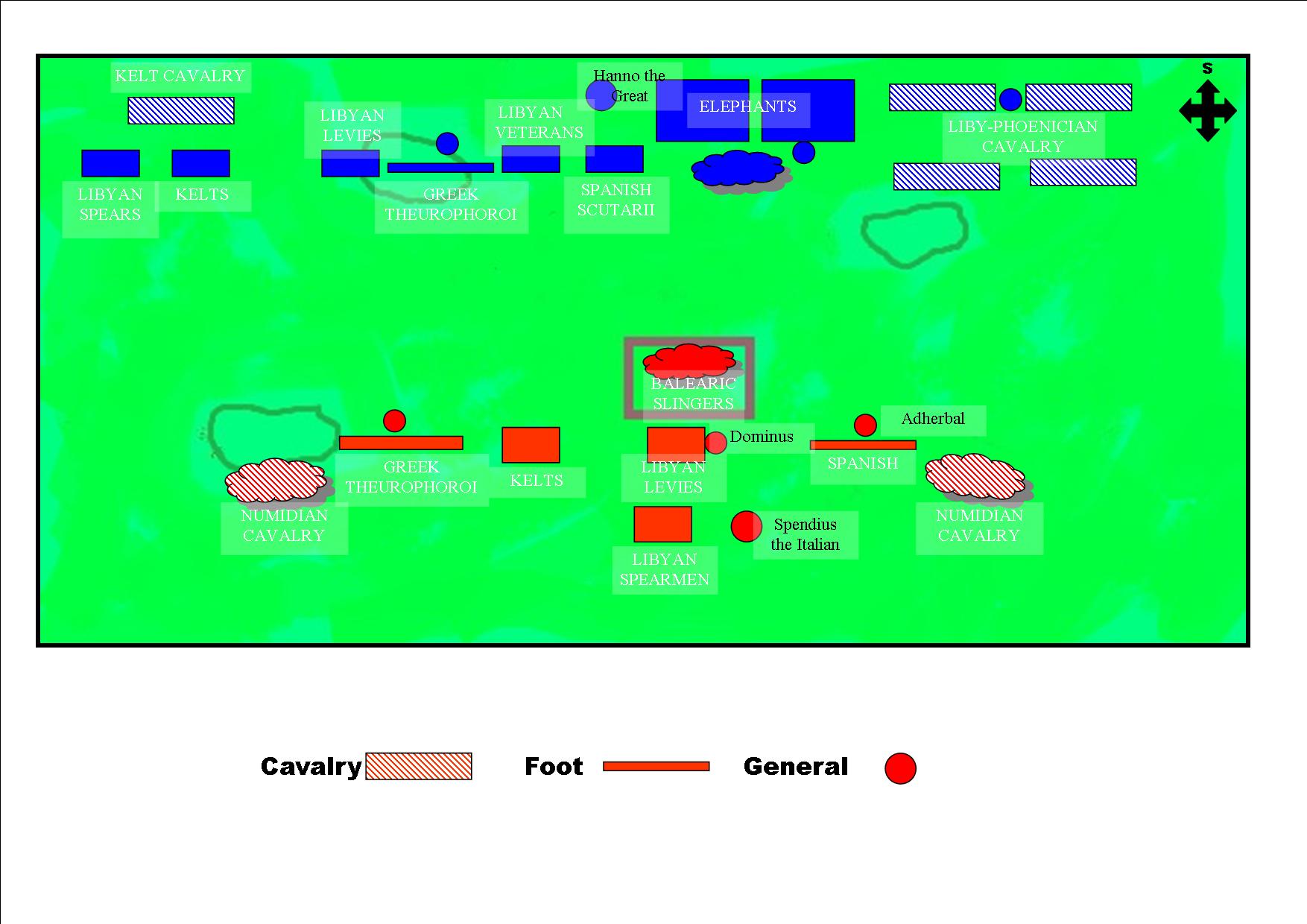 What Spendius did not know was that Hanno had spent a lot of silver (2 talents) spreading bribes amongst the mercenary captains. The result was that 50% of the Mercenary army were vulnerable to desertion and their actions would only be known after the battle had begun. Spendius had not neglected to spend on bribes himself but his efforts had only been rewarded with 2 possible desertions amongst the Carthaginian army. The other asset that Spendius had was General Adherbal whose inspiring presence raised his command’s morale to fanatical devotion. 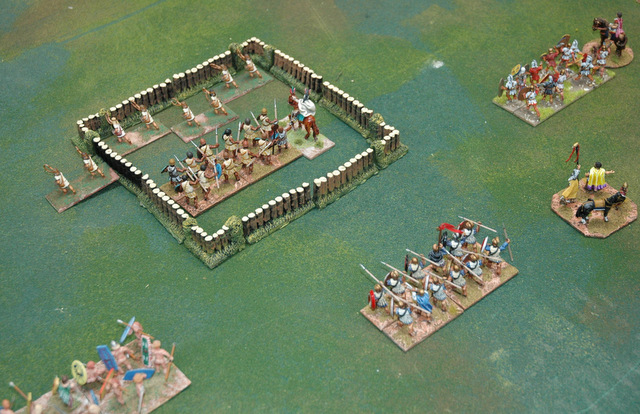 The Mercenaries prepare to defend their camp (click for larger image.)

Hanno deployed his men in one extended line meaning to outflank the smaller force on both the left and right. He ordered his entire line to advance uniformly except where the massed heavy cavalry got in each others way circumnavigating some small scrubby hills. As the advance continued Spendius’ Numidians could only manoeuvre to try to deflect the double envelopment. As the enemy drew near the Balearic slingers defending the front of the camp suddenly let out a cheer and turned about to face their erstwhile comrades. The deserters readied their missiles to complete the betrayal. (Luckily the other 3 units vulnerable to desertion passed the morale test.) 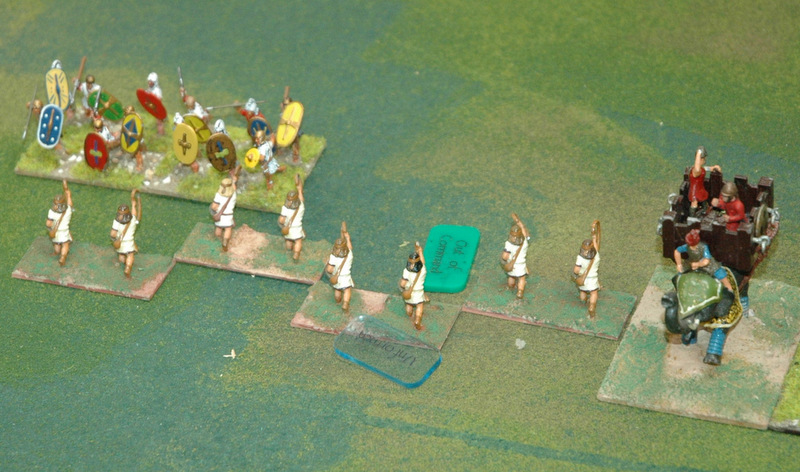 With his camp in enemy hands Spendius had to act quickly. He sent his general and fellow Italian Dominus to personally lead a unit of levied Libyan spearmen in an attack on their former comrades. The Libyans advanced so swiftly that they hurled the traitors across the palisade before they could get the range with their slingshots. The crisis not yet over, Spendius ordered the Numidians on both wings to attack before they were brushed aside and the trap sprung. The Numidians closed on the Liby-phoenician cavalry peppering them with javelins. This stopped their advance and Hanno's newly raised cavalry regiment took the opportunity to depart the battlefield, (happy to accept bribes in preference to hard fighting.) The close proximity of elephants also upset the Numidians doughty ponies, the horses not being impressed by Adherbal’s rousing speechifying. 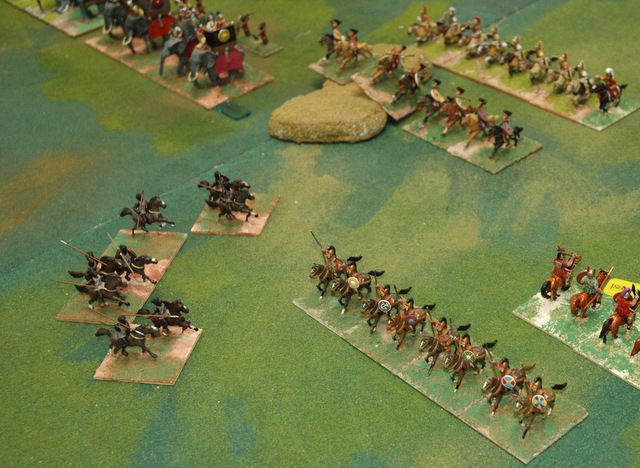 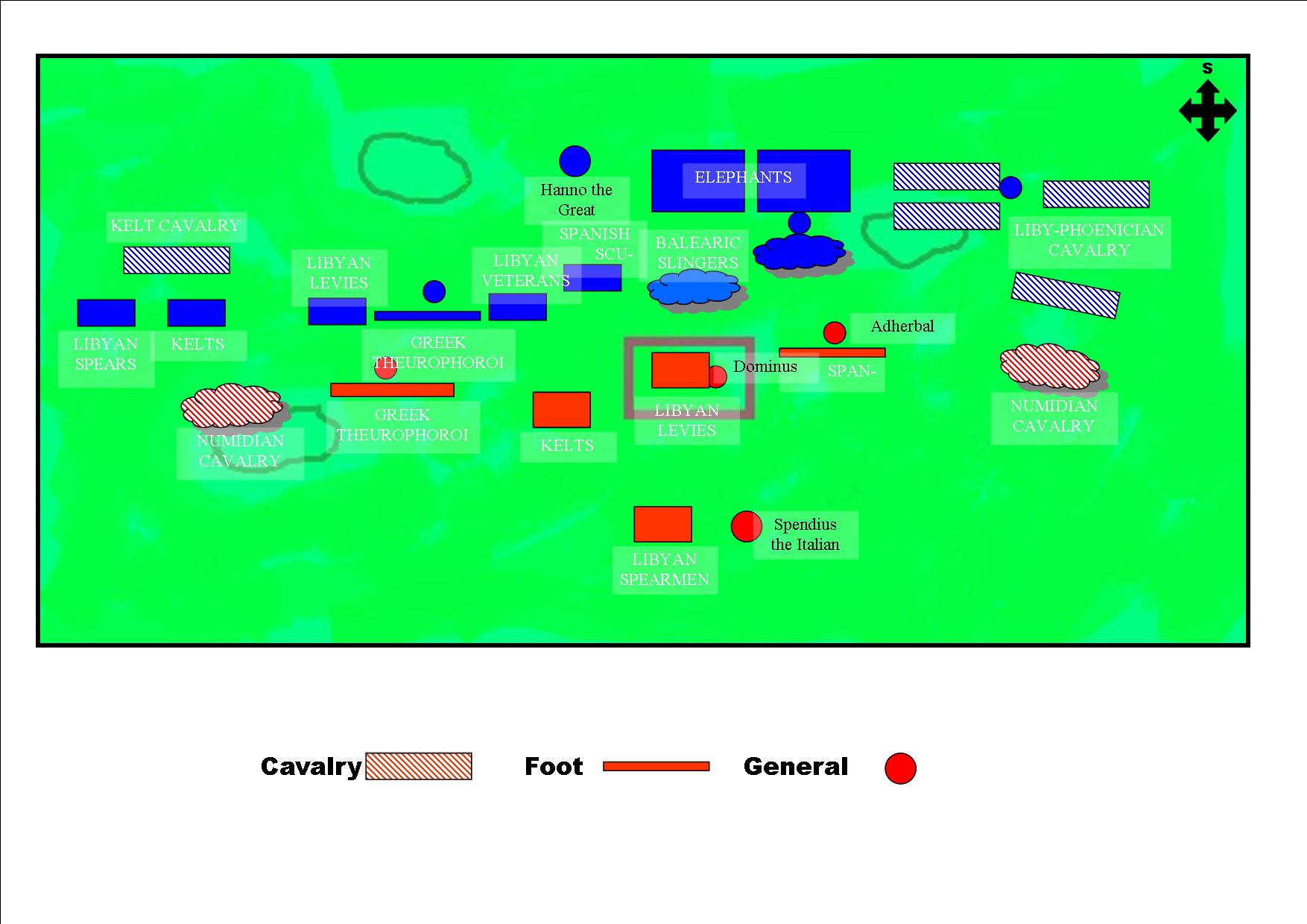 On the far flank Hanno had ordered forward a mixture of infantry with little cavalry support and the Numidians took full advantage, riding around the flank of Kelt warriors and slaying many with wickedly accurate javelin throws. The Kelts could not bear the unequal contest, broke and ran only to be ridden down by the merciless cavalry. 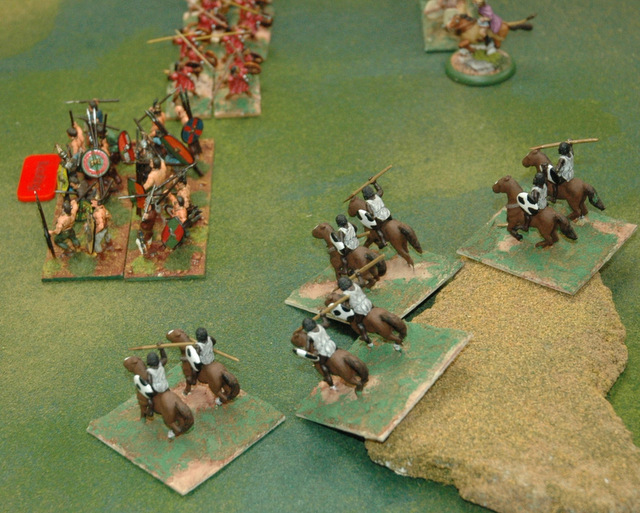 Hanno now decided it was time to retake the initiative and dismounting from his horse joined the cream of his army, the Spanish Scutarii. He led the Spaniards in a wild charge against the enemy Keltic mercenaries (guarding the left of the enemy camp,) running right up to the Keltic shieldwall howling their battle-cries. (A good use of a Heroic Moment card.) Unknown to Hanno, the Kelts had spent the bribes that had come their way on a great many amphorae of the strong local wine, so were in an equal state of battle rage! (Both were D10 BDV value.)  The Kelts own bards record that death was preferable to the hangover that was sure to come to survivors of the battle. The Kelts drew their long swords and rushed at the closing Spaniards, hurling them back before they could loose their heavy javelins. Encouraged by this, the neighbouring Mercenary Greek theurophorai also charged the enemy. Putting to flight levied Libyans and then crashing into fellow Greeks and routing them whilst they were still suffering from effects of the forced-march. 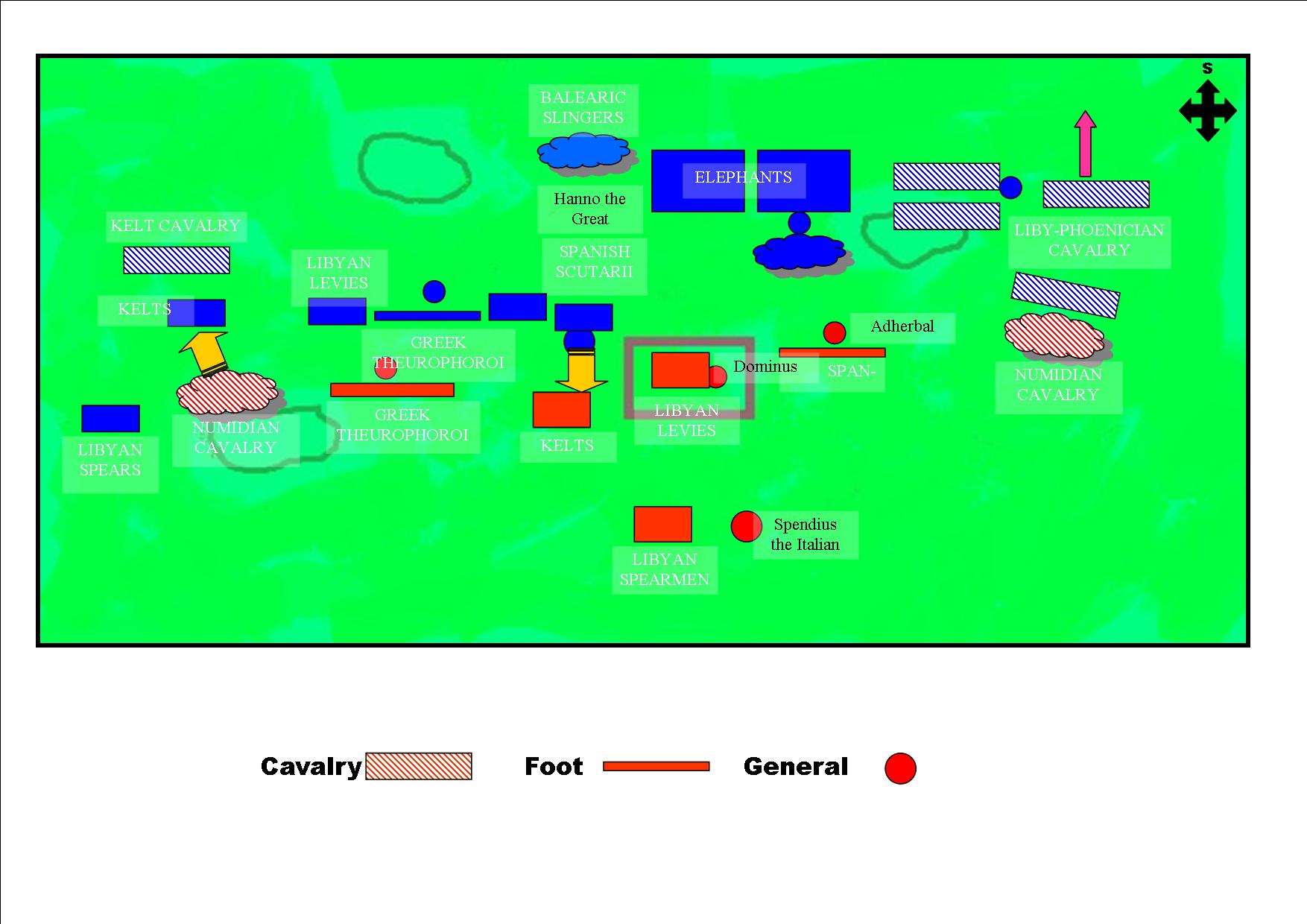 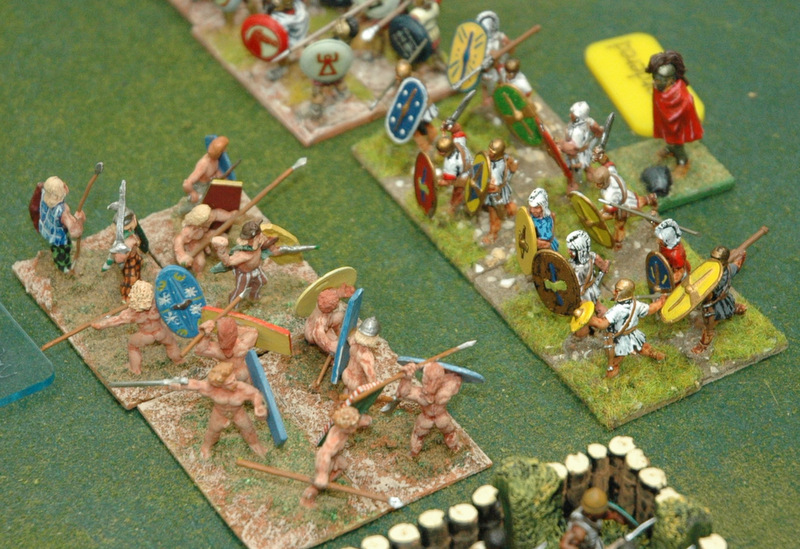 A moment of decision had arrived and it was Spendius who grasped it. He sent his generals Adherbal and Dominus to lead their men against the emblematic enemy troops – the fearsome elephants. Despite their devotion to Adherbal, his soldiers could do little against the trampling, trumpeting monsters and they soon broke and fled for the rear. Spendius himself forced his horse into their routing ranks and brought them back into a state of order. Dominus saw the fate of his fellow general and instead of a headlong clash lead his men through a gap in the enemy line (where the enemy Scutarii had stood) so that they could attack the elephants from the side, stabbing at their soft bellies and causing the herd to panic and run home to their stables. 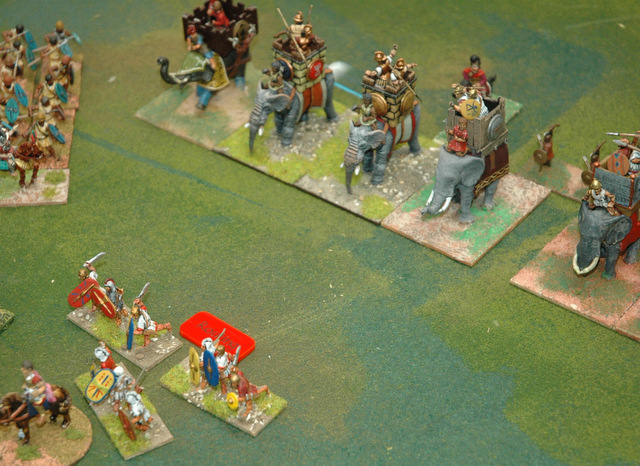 The elephants see off the first Mercenary attack. 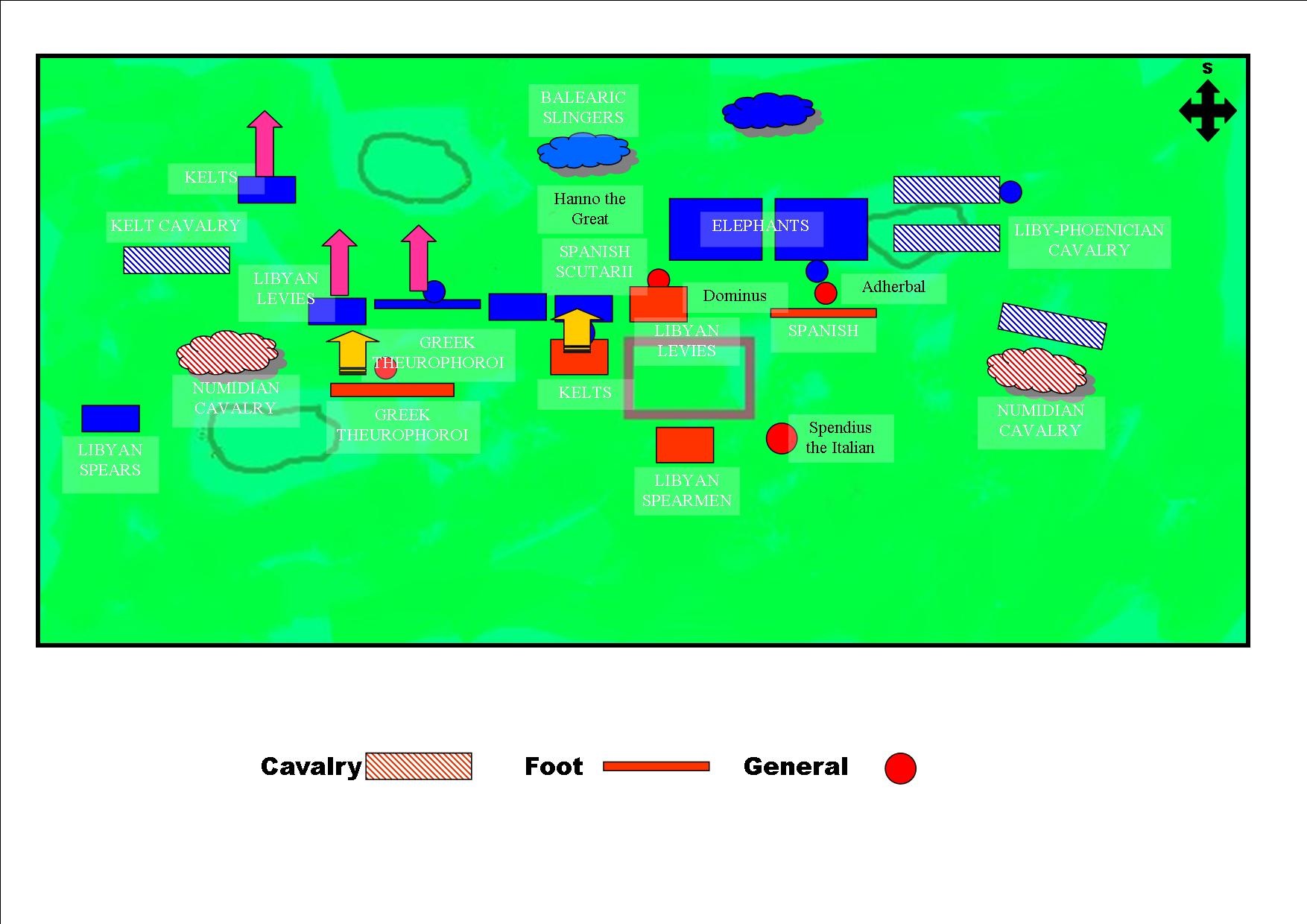 Hanno had one last chance to stop the battle slipping away from his grasp. His Spaniards could still hold the centre for long enough that the still mostly undamaged wings of the army could close and finish off the rebels. Fate did not look kindly on the Carthaginian cause however. As the Spanish were rallying to Hanno’s banner the drunken Kelts charged again and this time it was too much for the Scutarii. They crumpled under the attack and then turned and ran sweeping their Commander along with them in rout. Hanno now gave up the cause as lost and what was left of his army retired from the field and headed back to Carthage. 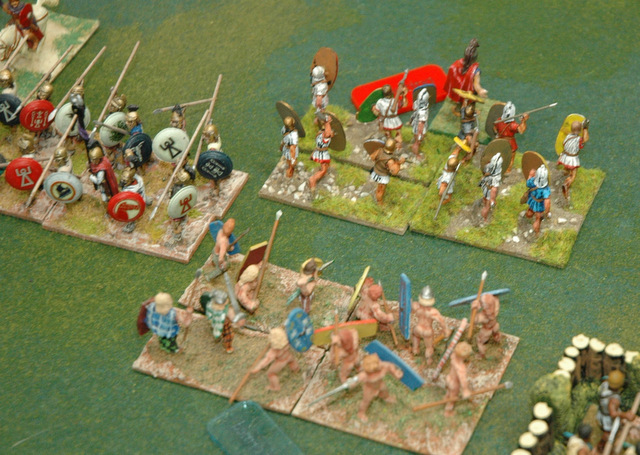 Hanno and his Spaniards flee. 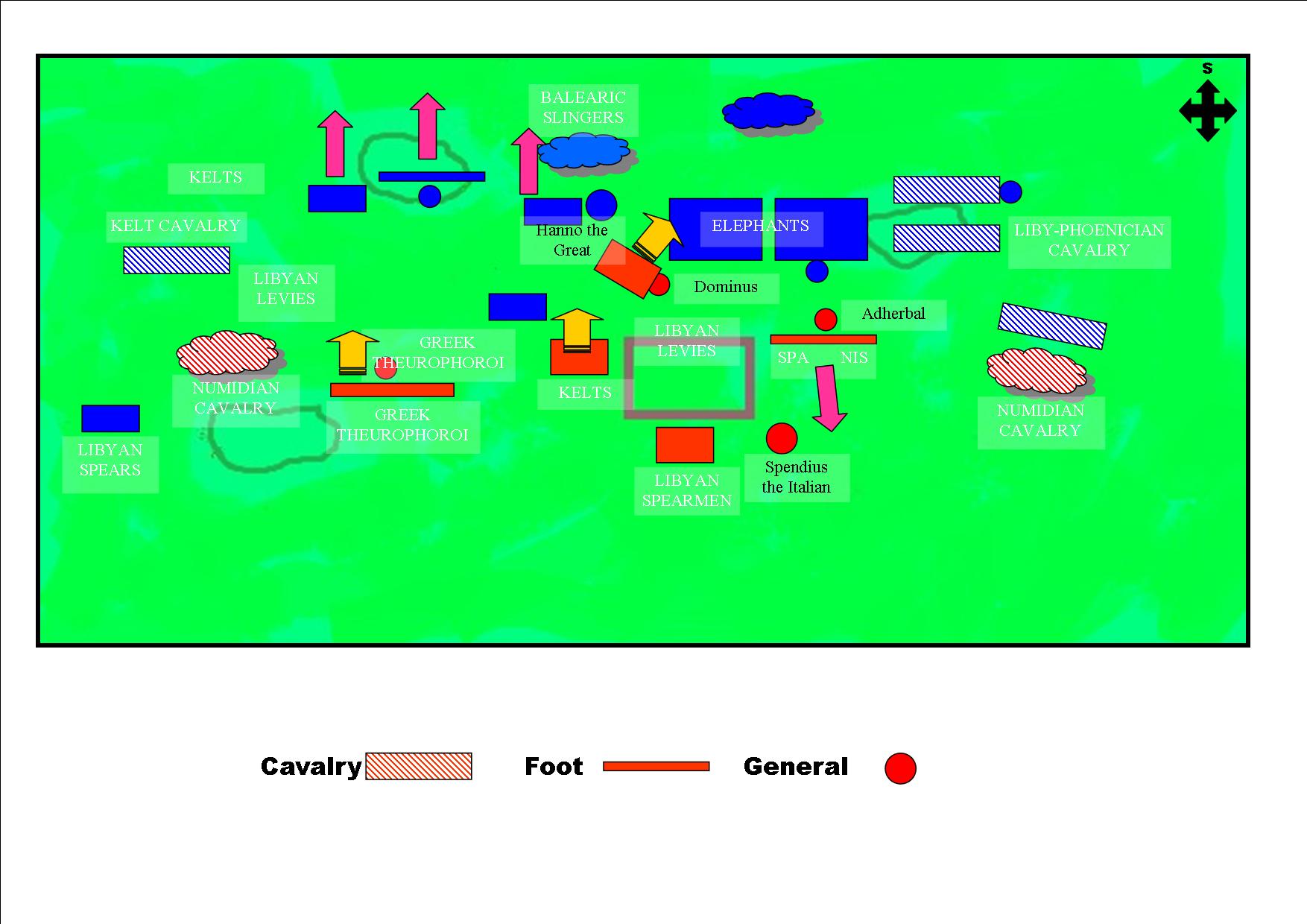 This game was our second attempt at fighting the first battle generated by my Truceless War campaign (see here.) Our first attempt to fight this game I messed up the rosters and tge mercenaries were comprehensively beaten within a turn. This time we increased the "budgets" of the armies by 50% to try to make the game a larger, more interesting affair.

Hanno's 3 points of recruitment gave him 45 Florins to generate an army on the Beat the Drum (BtD) table (here.) His other points had gone on Pay: 1, Diplomacy: 2 and Supply: 1.

The cards were kind for Hanno and the army generated included 14  units, including 2 of elephants! The additions over the first game were 3 units of Liby-Phoenician cavalry and one of levied spearmen. The spades drawn were more of a mixed bag.

Supply: 50% of units out of supply!!! (Obviously didn't realise how much fodder elephants require on a route march!)

Spendius' 2 points gave him 30 Florins this time to spend on the table (here), which gave him 8 units including 2 units of Numidian cavalry, 2 units of Libyan spearmen (one of them levy) and a unit of Spanish Scutarii. The spades gave

A strategy: Heroic commander. ne of the Mercenary sub generals is an inspiring commander, no units need take a morale test whilst he is on the field but he is at greater risk of dying if he leads a unit in combat. Useful against those elephants...

Much against the odds Hanno's larger force was decisively beaten in this game. The Carthaginians were unable to use their superior numbers effectively and the initiative never quite turned up when they needed it. In a way the smaller army had the easier task; the choices were much more limited and every chance to strike a blow had to be grasped (particularly once the Balearics had deserted in the first turn.) This aggressive strategy worked for the Mercenaries, winning the battle before the numbers could tell. In Piquet-Archon fortune really does favour the brave! 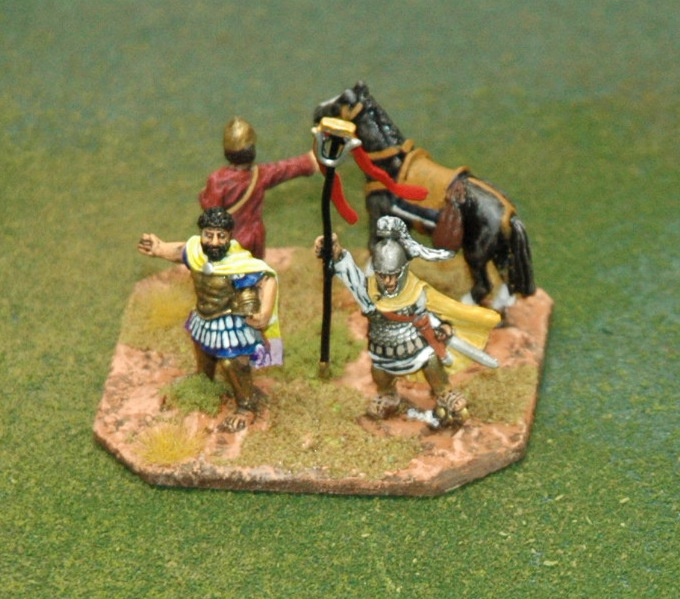