The Ambush at Hippo Regius

Following the disastrous defeat of Hanno the Great at Utica, it was with some hysteria that the citizens of Carthage heard the news that another of their stalwart allies, the city of Hippo Regius, was suffering disorder in the streets. Different political factions were arguing violently over the future of the town. Predictably the rebellious Mercenary captain, Mathos the Libyan, had taken this opportunity to march his army there. Blockading the town and lending weight to the faction sympathetic to the Mercenaries.

Voices were raised in Carthage demanding that another loyal ally not be intimidated into the enemy sphere. The generals currently in Carthage, Hanno the Great, Hamilcar Barca and Hannibal (the Elder) were forced to accept that working together would be vital to prevent another military disaster. Despite their festering personal differences Hamilcar and Hanno agreed to cooperate in a scheme to come to the aid of Hippo Regius. 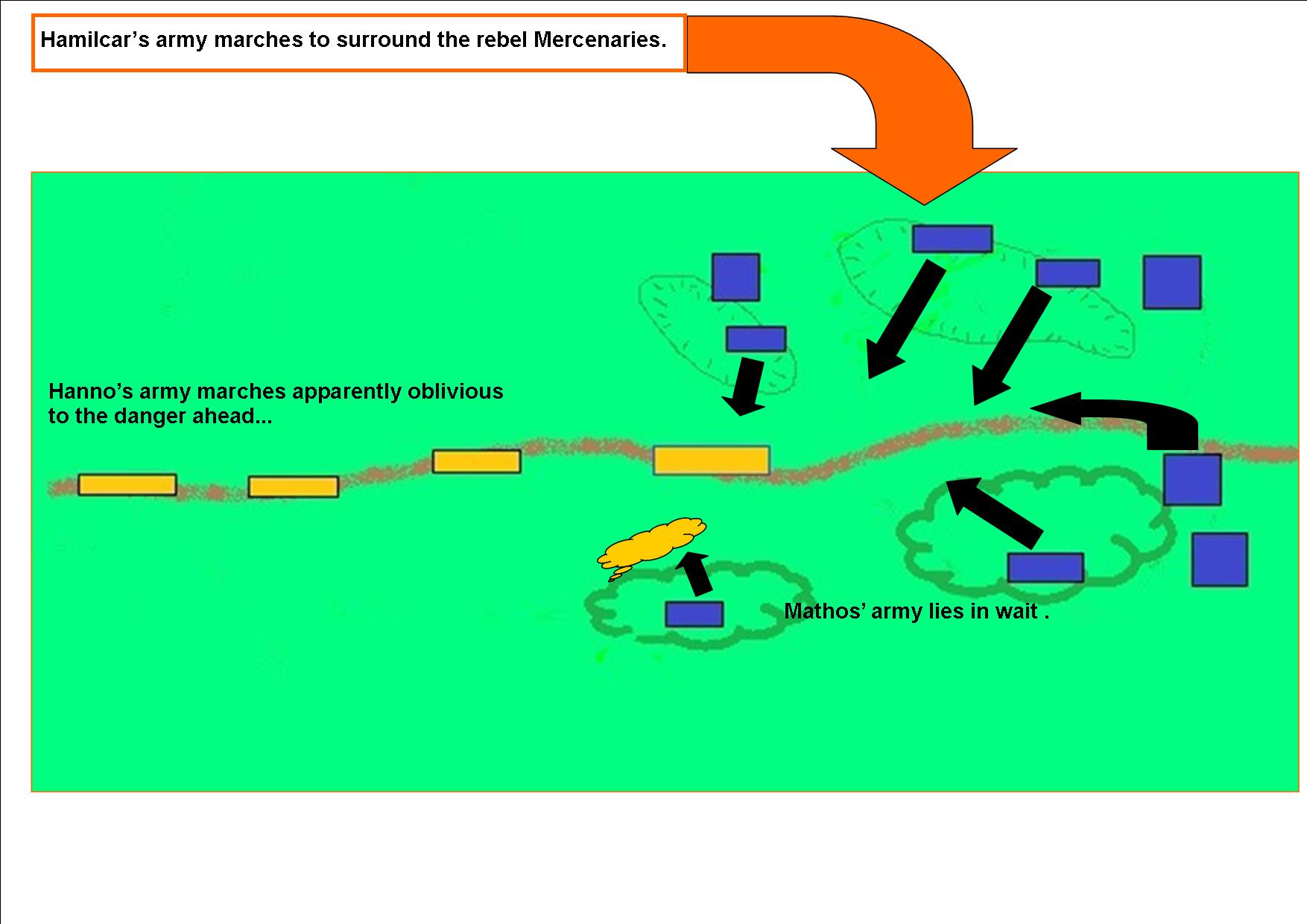 Their plan, not only to break the siege but to destroy one of the rebellious armies plaguing Carthage, was that Hanno would march on Hippo Regius with a small force, which would tempt Mathos to engage, in the hopes of another easy victory. Hamilcar with a larger army would surround and destroy the Libyan rebel, when it was too late for him to change his mind and retreat. The scheme worked better than they could have hoped. Despite spies reporting to Mathos’ colleague, Spendius, that there were two armies heading west from Carthage, the Italian mercenary general decided not to bother sending a warning. s they approached Hippo Regius, Hanno’s deliberately poor reconnaissance allowed the enemy scouts to get close to the marching Carthaginians and report to Mathos exactly what was approaching. Mesmerised by the apparently clueless marching army of Hanno, the Mercenaries did not spot the following army of Hamilcar.

Mathos determined to not only beat Hanno but to totally crush him. Sending his Numidians to find a likely ambush location, he took most of his army there, leaving just a skeleton force to carry on the blockade of Hippo Regius. Mathos’ scouts did now report the presence of Numidian cavalry nearby, who must belong to a force other than Hanno’s army (which clearly contained no Numidians.) Mathos was too intent on his impending victory however, to comprehend the significance of the information.

Hanno the Great, desperate to repair his reputation after the debacle at Utica, pressed forward along the road to Hippo Regius, knowing that he could encounter a superior enemy at any moment. However he dared not take obvious preparations for battle, in case he alerted the rebels to their danger. As Hanno’s army neared the ambush location a small band of levied Africans was sent to scout the woods along one edge of their route. The rest of the army however pressed forward in their extended march columns, terribly vulnerable to an enemy hidden so close to their flanks.

It can only be speculated what caused the ambush to be sprung too early. A group of Numidian horsemen plunged out of the cover between the trees and charged down the road towards the marching Carthaginians. Maybe it was simple indiscipline by the soldiers or a loss of nerve by their commander. Possibly on a subconscious level Mathos suspected there was something not right in the situation and decided he could not risk waiting for the enemy to be in a more perfect position for the ambush. The launch of the attack at this juncture probably saved the life of Hanno, as he was near the rear of the march column.

Despite the bulk of the Carthaginian army having not yet reached the defile between the hills and the woods, the vanguard was caught right in the teeth of the prepared surprise attack. The African levies were hurled back from the woods as elite Celtiberians swarmed out to attack the flanks of units presented to them. Hanno’s hired Celtic warriors found themselves beset on all sides and despite brave charges by the cavalry, initially dispersing the Numidians, the position was hopeless. Hanno flung his citizen militia down the road in an attempt to help the doomed vanguard but the wide intervals between units as they deployed from march order prevented them from properly supporting their comrades. A brave stand by the lowly African levies and some of the Carthaginian militia did buy enough time that Hanno was able to direct the remnant of his force into the fight. The Mercenary’s success was finally halted as Hanno’s elephants entered the fray. The Mercenary cavalry unused to facing these noisy smelly beasts panicked and ran, elephants in hot pursuit. 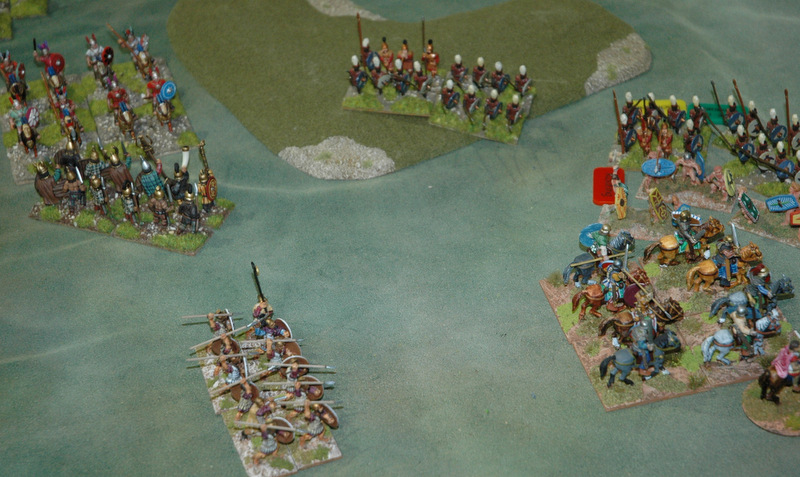 Carthaginian militia advance to try to aid the doomed vanguard.

The check to the enemy gave just enough of a respite to save Hanno’s small force. Hamilcar had had no choice but to march several hours behind his colleague’s army. Not only that, but to avoid being detected he was not able to aggressively scout out his enemy’s deployment. Hamilcar had to send his army at speed and blindly toward where he thought Mathos would be. Luck was with Hamilcar as not only had Mathos  positioned no rearguard but the Libyan general was alone and in the path of the swarm of Hamilcar’s light cavalry that came charging out of the hills. The fierce Numidians attempted to capture Mathos, but despite having his horse killed beneath him Mathos was able to fight his way clear and join a group his own cavalry waiting to join the battle in the defile. The arrival of friends brought new energy to Hanno’s soldiers and where spirits had been sinking, they now rose again. Hanno brought up the rest of his elephants and bodyguard cavalry and moved to trap the Mercenaries; the hunters now being hunted themselves. 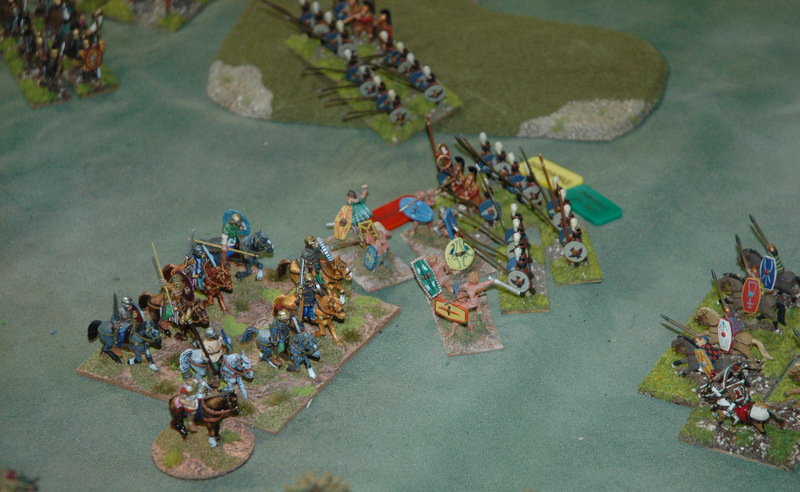 Loyal Celt cavalry charge into the teeth of the ambush, through their routing comrades.

The situation rapidly became bleak for Mathos. The enemy Numidians that were pursuing him now peppered the cavalry he had joined, with javelins whilst some of their number attacked the flanks and rear of the heavy Liby-phoenician horsemen. This was more than they could bear and despite(?) the presence of their commander they finally broke, the survivors scattering. Mathos was forced to flee with them and it was only by luck that the victorious Numidians were not quite able to catch him in the general rout that followed.