One of the problems with assembling a Bactrian Greek army is the vagueness and lack of detail in the information available. Don't get me wrong a scarcity of information means there is more latitude to make your own decisions on what the army looked like, which can be more interesting. If we can be sure about anything though, it must be safe to say the army contained war elephants.

As the Satrapy and then later Kingdom of Bactria was a neighbour to parts of India, well known for its war elephants, that would seem enough to validate their inclusion.  However we also have the histories of Polybius which tells us that the Selucid king Antiochus III took possession of the Bactrian elephant herd as part of a peace treaty, after he campaignedin the country for two years to try to reassert Selucid control. And if this weren't enough we have a surviving image of what the Bactrian war elephants looked like. 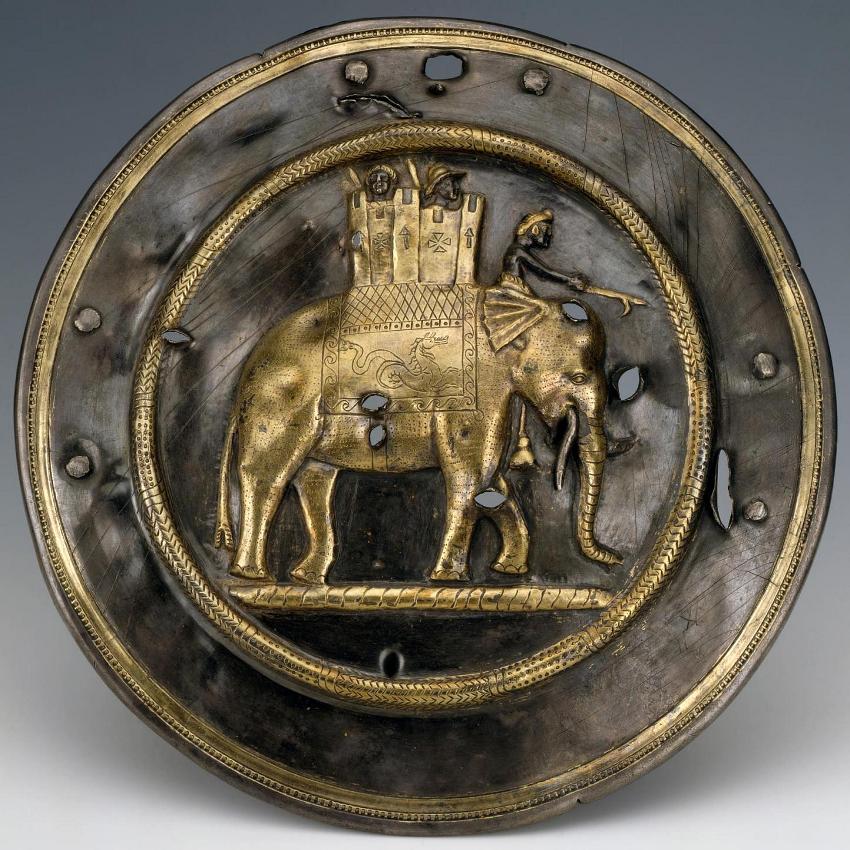 In the Hermitage Museum in Moscow, there are several metal discs or shallow bowls (phalera) with the war elephant engravings complete with fighting towers and warriors in them.  The inclusion of the tower eliminates any doubts that the elephants took an active role in battle, rather than just being a general's viewing platform or a parade mount for the king. Neither elephant image is wearing any armour so this could mean that  the climate would cause elephants to overheat if they were covered over or the artist had never seen it in action?.

Mine are armoured. (Well half of them.) I decided to add a second pair of elephant models to my original veteran pair that started life in a Phyrric army. Piquet's Archon ruleset has 4 bases as the "standard" size of a unit but elephants get a special dispensation and can field 2 of the bases showing  light infantry to represent escorts I suppose. I decided to go for the more costly option of fielding 4 elephant models for the unit  as this undoubtedly looks more impressive! 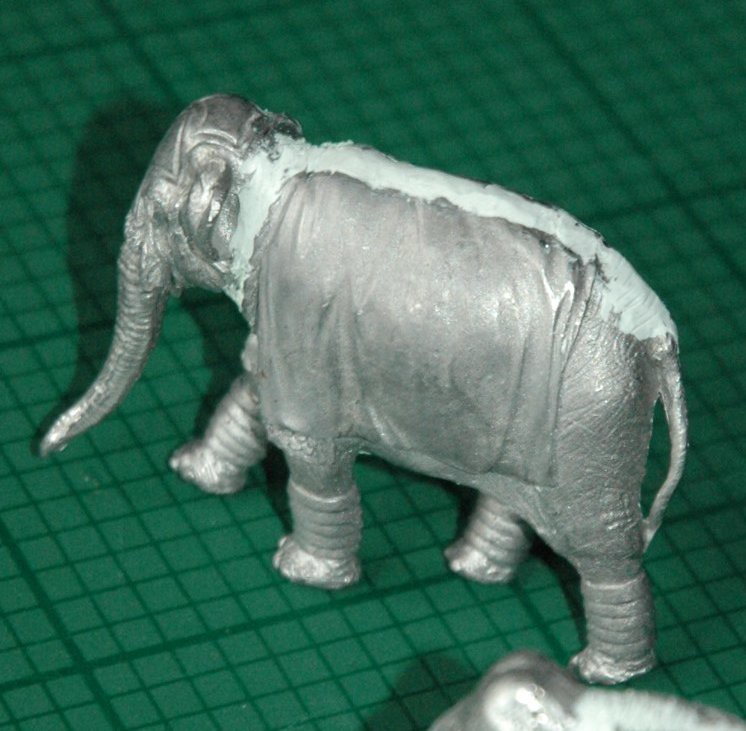 My original pair of models were from Essex Miniatures. Superb represetations of the beasts but requiring a lot of filling and sanding to ge the two halves of the body to match up. Les reminded me of this, having had the pleasure of assembling 8 of them for his Indian army. Despite this one of my reinforcements was an Essex model (how hard can it be...) The other is a Newline Miniatures figure. This is another nicely sculpted model and importantly very close in size to the others.Also it had been sitting around in the leadpile for many years. The only  drawback with the model is the trunk is very thick with little detail sculpted on the end. I added a more elephanty end with greenstuff but the girth is not an easy one to fix. 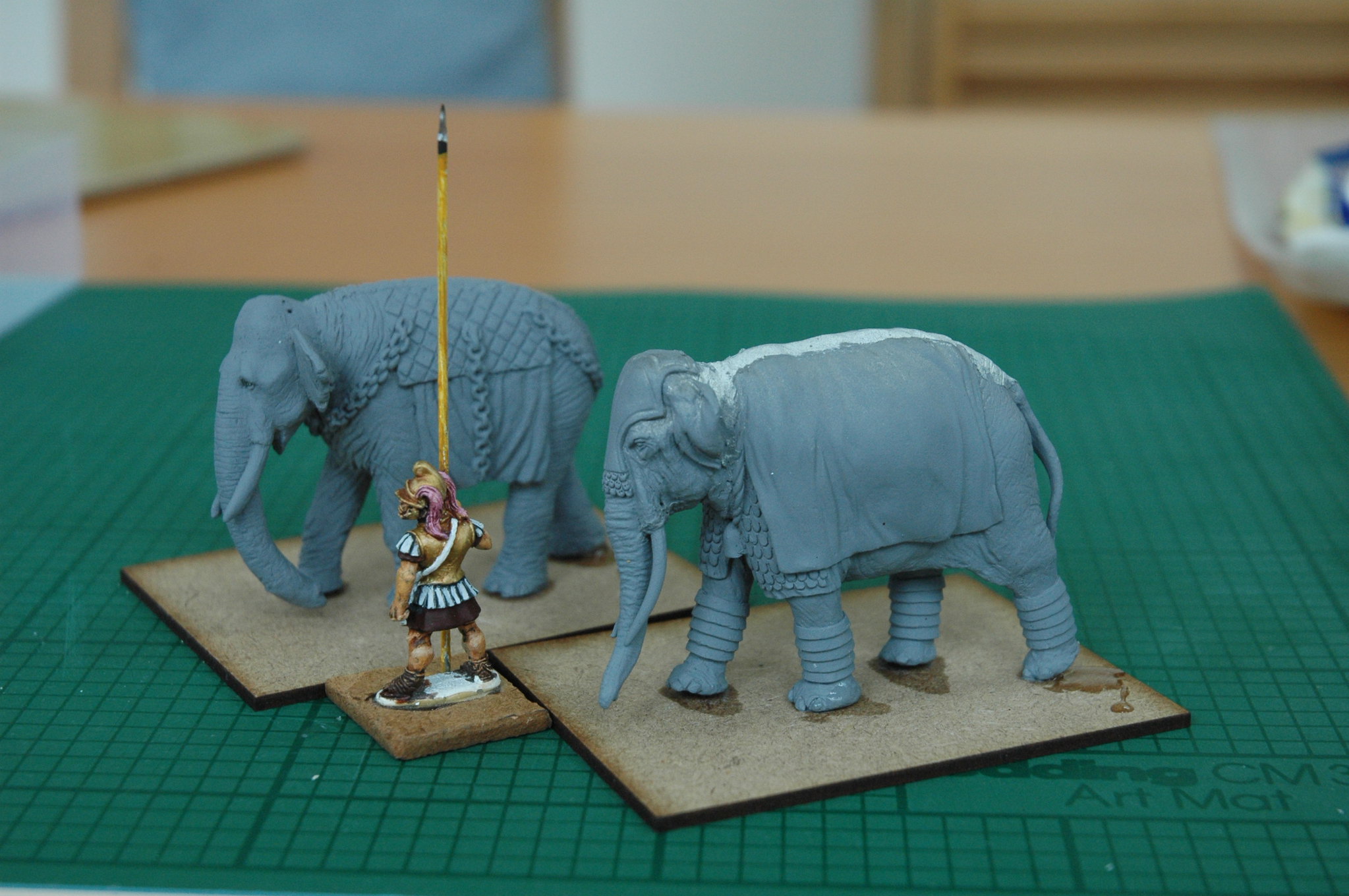 I can now start to understand the preference for resin elephant models where the whole body can be cast as one piece (and they're a fair bit lighter.) The Hermitage plates show something of the decoration on the saddlecloth (if that's what it is called.) I had a crack at painting the greek key pattern on one of the cloths and soon gave it up as a bad idea. Plan B was to use some "print your own" decals to help with the trickier details. I plundered the internet for images containing various Greek Key patterns that would print out at a small enough scale to apply to the elephants' housings. As I had half a page of decals to use up, I found as many Macedonian stars and Greek myth pictures that I thought might work as he centre of shield patterns. Plus a lot of spares, as I can be a bit cack-handed with decals. 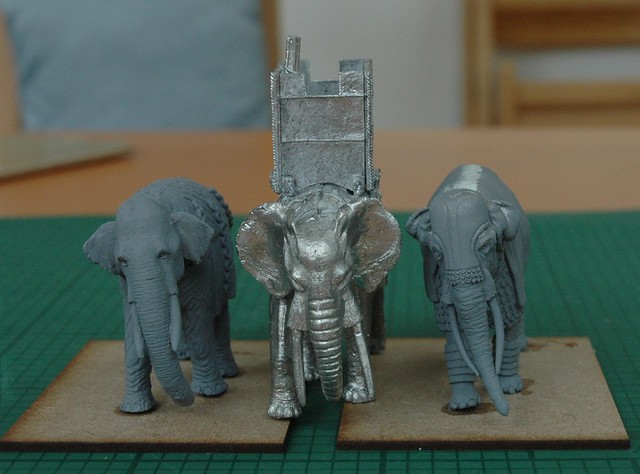 A comparison between the Essex and Newline Indian elephants and an Aventine African elephant. Similarly good detail but the African example should be a fair bit smaller than his Indian cousins. He will maybe do as a big bull elephant for a general. Anyway that's a different project, for this army I am sticking with smaller representations of the elephants and war mammoths can wait for another day.