New Prospects for 1690s Units?
by Adam 8 months ago

Figures for Heligoland Campaign
by Adam 10 months ago
More...

Caeasar vs. Germans
by Adam | 0 comments

This was our first tryout of Barry Hilton's "Beneath the Lily Banners" ruleset. We used pretty much everything we had painted at this stage  - thus the scarcity of cavalry.

The briefings for this game set up an attack on a small Irish town, with a garrison of three regiments and some guns, by a vastly superior force of six English regiments and one battalion of Dutch Guards. The balancing element to this one-sided scenario was the only two squadrons of horse on the table were both Jacobite cavalry. Both sides were given victory points to aim for that were intended to add additiopnal subtle factors for the opposing generals to consider. The Williamite general wanted desperately to show the loyalty and fighting prowess of the distrusted English brigades, so lost victory points if the Dutch elements of the force achieved more than the English. The French general could gain points by saving the sole French (Walloon) regiment that he had, regardless of the outcome of the battle or the slaughter amongst his Irish troops.

As a very asymmetric scenario this had the possibility of being quite unbalanced, particularly using rules with which we are unfamiliar. Seeing the English lining their baseline did seem to suggest that they were going to have an easy task taking the town. Without an obvious way to get at a flank of the enemy infantry the Jacobite horse, split one squadron on each side of the town, would seem to be able to do little to aid the defence. 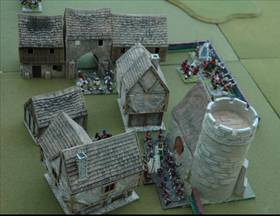 The English line advanced implacably on Dunleahy with the Dutch Guards and the veteran Kirke’s regiment aimed right into the teeth of the Jacobite defences. As soon as they were in range the Jacobites opened fire with their light guns and then musketry. The Allied foot pressed on however wanting to reduce the range and make their fire count, returning fire only with one of the flanking regiments. This was perhaps a mistake as the neat starting line of foot now becamemuch less uniform (not helped by a series of poor rolls to decide what percentage of the Williamite force could move) and the squadron of Jacobite horse that had been edging forward on their left now took its opportunity.

The Jacobite horse flung themselves at the infantry that had outpaced its supports.  It obligingly panicked and loosed musketry at long range inflicting a solitary casualty. The horse charged home and despite having to hack their way through the steady pikemen managed to cause two casualties. Babbingtons Regiment failed its morale test and attempted to retreat. They were subsequently cut to pieces by the victorious Jacobites, having no friendly cavalry to intervene. (This seemed like a suicidal morale result, as the second charge by the cavalr, now into the rear of their opponent is almost certain to break them).

Dunleahy was starting to look like a tough nut to crack. Kirkes Regiment suffered a constant trickle of casualties from the Jacobite muskets and guns so when they began returning fire they were already reduced in numbers and effectiveness. They eventually lost heart and retreated before they could attack the town walls. The Dutch Guards marched right up to the fortifications before they gave fire and were soon embroiled in a fierce exchange with the French Regiment Isengien. Although these two elite regiments were each giving as good as they received it was the Dutch Guards who started to waver first. To complete their misery, they were next attacked by a squadron of Jacobite horse who mercilessly cut down the Guardsmen before they could run for the cover of the regiment’s pikes. 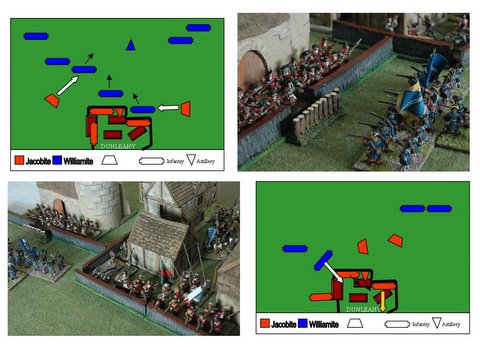 With the shattered English line at their mercy, the Jacobites now were the ones to suffer from poor communication just when they had the chance to press home their advantage. The victorious cavalry cut down some Dutch gunners and then spent an age reforming their ranks whilst the chance to inflict further defeats on the English reserves came and went. The second line of English regiments now attacked the town and managed to break into the defenders moments before the French general could unleash flank attacks using his cavalry and poorly armed militia. The brave defenders of Dunleahy had taken as much as they could stand and fled in panic from the bloodthirsty Scots. At this point the French general decided to extract the shattered remnants of his Walloon regiment and leave the town to the tender mercies of the enemy.

Despite the limited experience with the rules and the asymetric scenario Beneath the Lily Banners gave a good exciting game. There was some discontent with the way cavalry combat worked and the C&C mechanism of allowing only a percentage of units to receive action orders seems a bit blunt and unsubtle. There is now a 2nd edition of the rules out which might address these issues.