Later Roman Army
by Adam over a year ago

More plastic Persians
by Adam over a year ago

New Prospects for 1690s Units?
by Adam over a year ago

Figures for Heligoland Campaign
by Adam over a year ago
More...

Have tricorne will travel...

This is one of our favourite eras to fight battles in. True linear warfare with serried ranks of musketeers and thundering cavalry charges on the flanks of the action! Cannon were an effective force in this period but did not dominate the battlefield and althought there were a few specialist light troops (colourful Grenzers, Hussars and Freicorps) there was not the complexity of skirmish tactics of the later Napoleonic period.

If you want wilder, less formal elements to your games there are wild Native Americans to lurk in the woods and scalp the unwary Rangers and Militia. For a battlefield that is a splendid array of elephants, cavalry, giant cannons and rockets there are the wars in India to play. The quality of the non-European forces isn't great but there are lots of them (and did I mention elephants?!)

Fought between two great alliances of European nations from 1756 to 1763, this was arguably the first worldwide war, as France and Great Britain vied for advantage around the globe. Particularly in North America and India the events of this period laid the foundations of the British Empire.

On the Continent Austria Hungary had achieved a diplomatic coup by welding together a mighty  alliance including Russia and France, with the objective of reclaiming the provinces treacherously occupied by the Prussians in the previous war some ten years earlier. The British had swapped sides from this earlier conflict (the War of Austrian Succession) to become the only ally of any stature that Prussia would have. With British bullion to rely on and the formidable Prussian army at its peak, Frederick the Great was to turn out to be no pushover however!

Over the years Nick and I have fought many a tabletop action with our French, Prussian and Austro-Hungarian armies. These games have followed all sorts of scenarios from straight attack and defense to attempting to crush a sedentary army by rolling up its flank. As our collections of toy soldiers grow it has become possible to refight some of the real battles of the Seven Years War, even if in reduced form. My ambition is to go through the campaigns of the war year by year refighting a version of each real battle that we can, and also any subsequent battles that are suggested by the outcomes of each of our games.

For 1757 we have refought Rossbach (click here for description)

and following our reversal of history, Second Rossbach (click here for description)

Austrian 6lb artillery battery ready for action(even if the officer doesn't seem entirely sure of his position.) 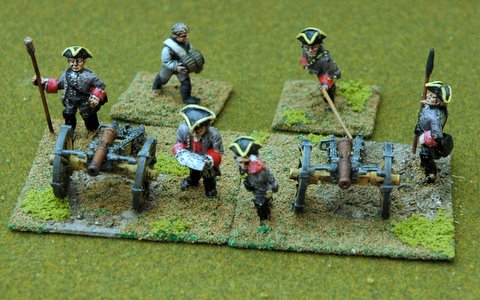